A Ouija board (also known as a spirit board) is a flat surface made up of letters, numbers & the words yes, no & goodbye. Those that wish to commune with the dead place their fingers on the planchette (a movable indicator). When talking to the dead the spirit will move the planchette to spell out messages on the board.

Very spooky…and an idea that has been used to great effect in horror movies but not this one.

Ouija is a terrible horror movie that wouldn’t scare a child. Jump-scare filled with dumb character decisions & lacking any kind of imagination.

Debbie commits suicide using Christmas lights at her home within the first few minutes. Her long-time friend Laine had suspected something was wrong as she had become withdrawn & unwilling to let anyone in her home.

Hurt & confused by her death, Laine agrees to house-sit for Debbie’s grieving parents & discovers a Ouija board in her room. Along with a group of her ‘who cares, they’re all going to die’ friends she uses the board to try & say goodbye to Debbie.

They make contact with a spirit that they believe to be Debbie & say goodbye. Each person experiences a strange message soon after (Hello friend written in chalk on a wall, scratched on a desk etc.). Freaked out they all agree to play with the board again & discover that it’s not Debbie they made contact with.

As the body count begins to rise Laine delves deeper into the houses history & makes a discovery about a mother & 2 daughters that lived there once before. The mother was obsessed with the dark arts & it eventually consumed her to such a point that she used one of her daughters as a vessel, sowing her mouth up. The other survived & murdered her mother ending up at a mental institution.

The Ouija board made a channel to the other side & now they have to close it.

What we get is a run of the mill bore-fest that attempts to drop a twist in the final third that is painfully obvious if you were paying attention. The group of actors involved are incredibly forgettable. You’re supposed to be feel sympathy for Laine having lost her best friend but other than a brief prologue (as kids) & the 2 minutes that led to Debbie’s death there is nothing to indicate that they are as close as they were. This only starts to kick in after the supposed suicide as we see Laine looking sad & staring at pictures of her & Debbie. 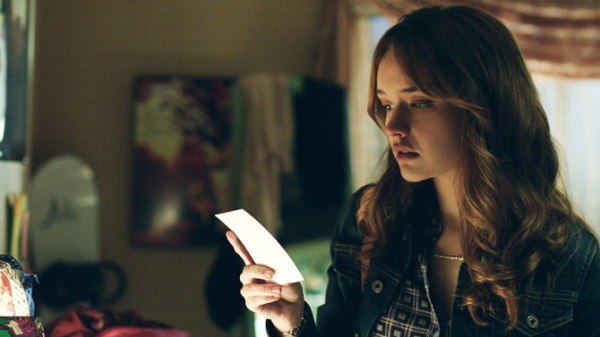 You won’t buy it, I didn’t & it just means you won’t care one bit about her efforts to speak to Debbie’s spirit (also there is a bit at the end that will just leave you exasperated).

The rest of the cast are all there to be taken out one by one…sure they have names like, Debbie’s boyfriend, Laine’s boyfriend & Laine’s sister (can’t remember their actual names, doesn’t seem like it matters) but there is no connection & it’s a waiting game to see how they die. That in itself is infuriating as most deaths can be seen coming easily in particular the pool drowning. I have one positive to say regarding the deaths…one girl gets lifted off her feet while possessed (yes this ghost does that as well) & drops her from height smashing her head on the bathroom sink.

I laughed hard…I don’t think that was what they were going for.

In a movie like this you have to expect jump scares & they are here in abundance. I stopped counting after it hit double figures & they are some of the most annoying kinds of jump scares. You know the sort, someone steps out from behind a corner, someone closes their locker & a person is standing there…piss-poor shock moments that have little effect.

A fast-paced final third sees things ramp up a bit which is an improvement but all subtly goes out the window. What was once a deadly ghost becomes the kind that grabs you & locks you in another room. The use of the stretched mouth face screams becomes extremely ineffective after it’s used as much as it is here.

I think that’s Ouija’s biggest problem…it takes an idea & just reuses it over & over again until you’re sick of seeing it and of course it ends with obvious sequel-bait. Please, no… 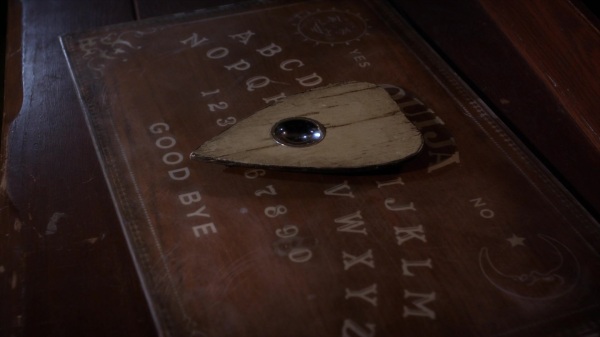 Lazy, boring & offering nothing new to the horror genre. Jump scares used to this extent are infuriating & the plot is a mess with a twist that is easy to see coming. A bad movie that made way too much money on release.