Surely a contender for the ‘so bad, it’s good’ award….

Growing up in Ireland Leprechauns were something I was very aware of. I grew up knowing that a pot of gold was at the end of a rainbow, that leprechauns wore green & had an obsession with shiny shoes. They are happy & friendly folk filled with laughter. I had never seen them from a negative point of view but I will admit the idea of an evil Leprechaun interested me.

So some old bloke steals a Leprechaun’s pot of gold & returns back home to celebrate with his wife. This Leprechaun does not give up so easily & follows the man home. The man manages to trap the Leprechaun in a box before having a stroke. Fast-forward 10 years…a father & his teenage daughter (played by Jennifer Aniston in her first ever role) move into the house. The Leprechaun is accidently released & starts searching for his pot of gold while killing anyone that gets in his way. 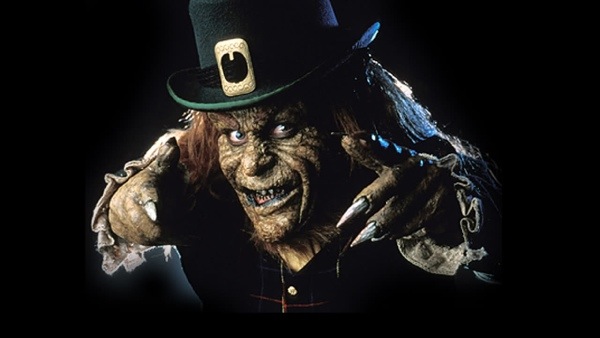 Of the bat, credit must be given to Warwick Davis who plays the evil Leprechaun. A lot of the lines are so bad that he must have been cringing when saying them yet he delivers them so convincingly. The scene where the Leprechaun is distracted by our band of survivors by them throwing shoes that he has to shine all the while muttering threats is very clever. 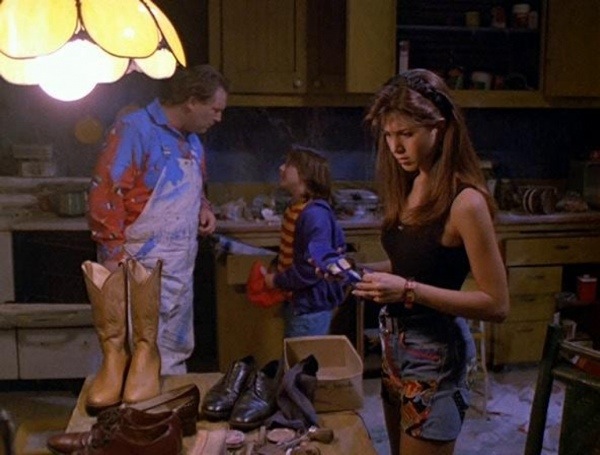 The same can be said for most of the cast in fact with all of them putting the effort in. It makes the whole film a lot more enjoyable when it seems as if the cast were having fun as well.

The make-up of the Leprechaun is probably the best thing in the movie, he looks excellent & just the right side of nasty. I was very convinced & when I cast my mind back I can see it all quite clearly so it had the right effect on me.

Many have described the movie has a horror-comedy although I struggled to even raise a smile at most of the one-liners (cheesy not funny). I found the scenes were the Leprechaun rides a tri-cycle & uses a wheelchair amusing although I’m not so sure they were supposed to be.

I also think that the comedy tag doesn’t do the level of gore any justice as there are plenty of nasty scenes including an excellent ‘I’m melting-esqe’ scene. Deaths come quickly in this movie & the Leprechaun doesn’t care who you are. Face scratching, ears bitten off, burns, clawing & faces ripped off are just some of the pleasures that come throughout.

In the end though I found myself clock-watching & wondering how much longer the move had to go.

It’s an enjoyable movie that just feels a little too long in the end. Not likely to scare anyone nowadays but with some good gore scenes it does raise the age rating a bit. Warwick Davis does a wonderful job.