Of all the remakes that have plagued horror cinema over the last 10 years one of the most surprising to get the ‘modern’ touch-up was the 1979 rape-revenge movie, Day of the Woman aka I Spit on Your Grave.

The original is far from being a classic but it’s brutal tale of a woman driven to extraordinary lengths with her vengeance after she is gang-raped & left for dead gained a lot of attention, a lot of it negative. Its message was confusing wanting you to sympathise with the female victim but making it difficult as she wrecks horrific vengeance…two wrongs don’t make a right.

This remake suffers from the same problem yet somehow manages to make the lead character, Jennifer Hills even more unsympathetic.

She is a novelist from the ‘big city’ & has rented a cabin in the middle of nowhere for some peace & quiet so she can write her latest book. On the way she gets lost & ends up running into Johnny, Stanley & Andy at the local gas station. She rebukes Johnny’s attempts at flirting before accidentally embarrassing him in front of his friends.

It’s all incredibly awkward because of just how predictable it is, lacking intrigue or excitement. The movie is basically saying…these are our small town yokels, the baddies of the movie & this is our city girl, the victim/heroine. It’s not even subtle.

Now in 2010 it’s hard to believe that any young woman would go to such a place on their own with their mobile phone as the only point of contact. In the 70’s this kind of angle was far more believable but Jennifer’s lack of common sense is laughable.

We know what’s going to happen, her friendliness towards the mentally challenged boy, Matthew leads to the group of yokels deciding to teach the ‘city girl’ a lesson. As they see it, she has come to their turf & acted like she’s better than them. Their motivations are sketchy at best…how they got from feeling insulted by her ‘city girl’ status to physical & mental abuse, rape & attempted murder is beyond me. A brief scene of them smashing up a fish doesn’t sell their sadistic nature at all. Boredom seems to drive a lot of their actions.

Out of the group the only one that comes across even slightly threatening is the leader, Johnny. He is intimidating & incredibly slimy; someone you want to see get their comeuppance. His two sidekicks are forgettable & stupid (no really, one in particular films everything that they do) while Matthew is extremely unlikable. I’m not sure if I was supposed to feel sorry for him, forced into raping Jennifer under immense peer pressure & than suffering intense guilt for the rest of the movie.

I don’t care how mentally challenged he is, he deserved everything he gets in this movie.

She runs into the Sheriff who agrees to accompany her back to her cabin & deal with the men. Yep, he’s in cahoots with them in quite possibly the dumbest angle of the movie. This is the sheriff, a man with a wife, young daughter & child on the way & I’m supposed to believe that he would risk his entire life for this? (We know this as we get family life scenes for this man, obviously setting up an angle for Jennifer to get at him in other ways) Alongside 3 men who hardly seem like the smartest hillbillies in the world and Matthew who surely couldn’t be trusted to keep his mouth shut.

Alongside the other four men they take turns at raping her in lengthy scenes that just seem to go on forever. As she wanders naked away from the group they plan to shoot her dead but she falls into the river instead. They presume she has drowned & attempt to cover their tracks including destroying the videotape…Seriously? The Sheriff actually has to point out to them that the tape is evidence…how stupid do you have to be!?

Anyway…Jennifer is presumed dead & they carry on with their lives until Jennifer resurfaces with revenge on her mind. The final third of the movie is Jennifer meting out her revenge on the men that raped & left her for dead.

…and it gets so damn stupid.

Whatever message this movie was attempting to deliver is lost as we see Jennifer put her attackers in cartoonish impossibilities such as using fish hooks to hold one’s eyes open then rubbing fish guts in his face which attracts birds to peck his eyes out. How about a shotgun shoved up someone’s butt with the trigger being roped to the hand of another currently unconscious?

Whereas the original had the victim using her sexuality to trap the men, then murdering them in believable fashion this one just sees Jennifer torturing them to such an extent that it becomes laughable & she becomes an unsympathetic character who seems to possess the same sadistic traits as her attackers.

Sure it creates some interesting & gory visuals but lacks realism something that the movie has worked hard at creating for the first half. It’s a predictable finish & one that leaves far too many questions being asked. Such as…so Jennifer kills all of them in protracted & unnecessary way but for what? She will spend the rest of her life in jail now. They will have won by taking her entire life away from her even after she evaded their attempts to kill her.

At one stage I thought that she was going to go down the route of setting the Sheriff up to reveal his crime to his family & the townspeople (if there are any) thus destroying his life & humiliating him. I think that would have been excellent retribution especially if she managed to pin the deaths of the other 4 on him also. Instead it’s all part of a fake out that results in him getting a shotgun up his ass.

Credit has to be given to the actress who plays Jennifer Hills though (Sarah Butler) who is incredibly convincing as the victim & later the sadistic killer. She is the stand out actor in a movie dogged by its length, lack of believability & cartoonish brutality. 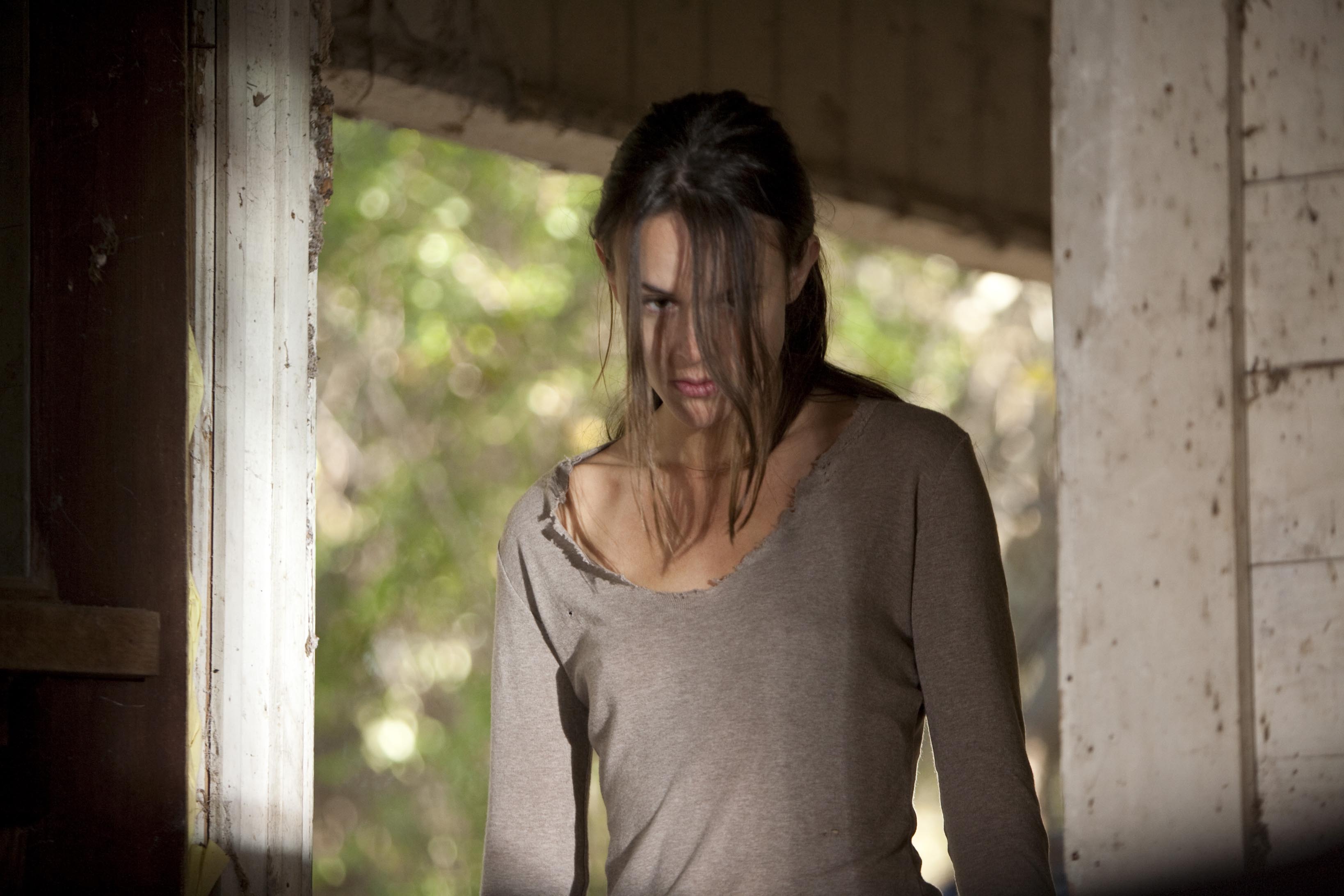 I Spit on Your Grave - Remake