“I’m gonna kill every last one of you godless fuckin’ pieces of shit!”

Having recently suffered through the hell that was the first season of the Dusk Till Dawn TV Series, there was no question that I was going to have to go back and watch the film just to see if it still holds up.

It’s been a long time since I’ve seen the movie but it’s still amazing to see George Clooney & Quentin Tarantino opposite each other. They play Seth & Richard Gecko; brothers on the run after Richie broke Seth out of prison killing a few police officers in the process. 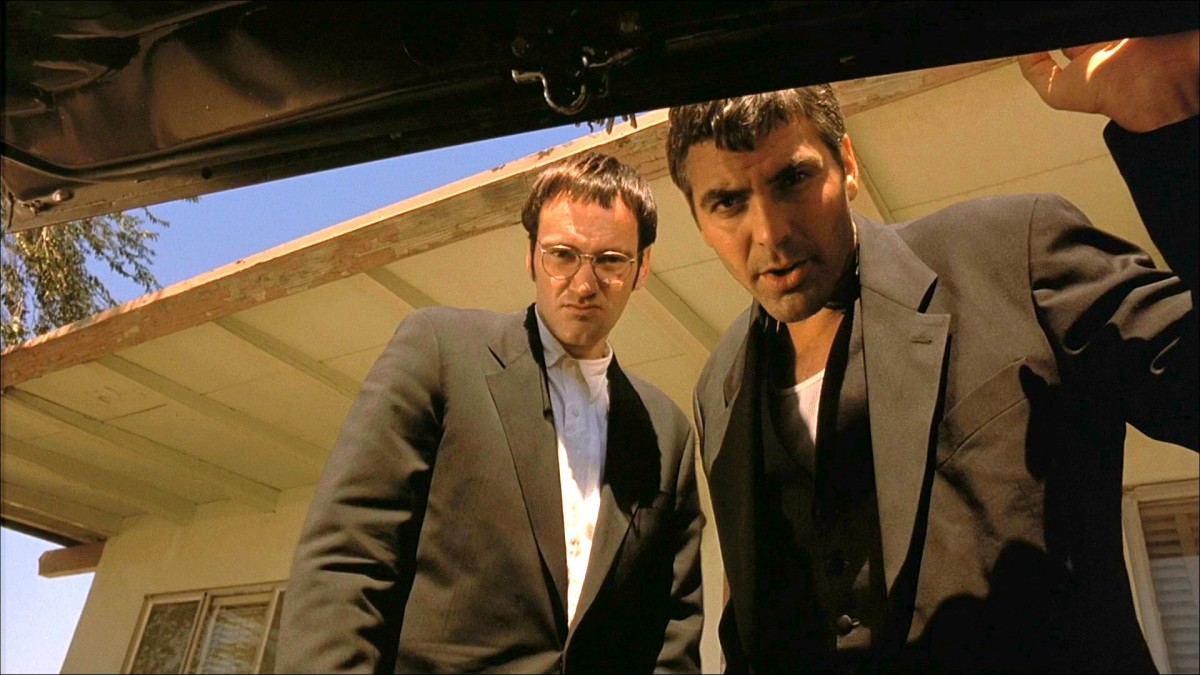 The opening of the film is incredible, quite possible the best part of the entire movie as we see the Gecko brothers hold up a store. The interaction of the pair & the brutality of their behaviour is addictive watching & you just want to see more. Seth is ruthless & Richie is unhinged, together they make a deadly pair something the Fuller family will learn.

Jacob Fuller (Harvey Keitel) is a pastor who is having a crisis of faith. He is on holiday with his son & daughter, Scott (Ernest Liu) and Kate (Juliette Lewis) driving cross country in their RV when they run into the Geckos at a motel. 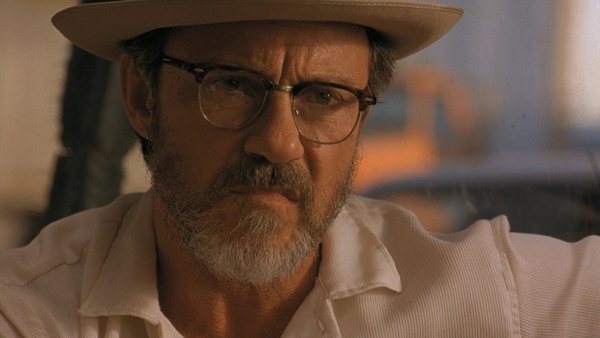 It’s here that we see the extent of Richie’s mental instability as he rapes and murders a hostage they had and imagines Kate asking him for sex. The scene where Seth discovers the mangled body of the woman is incredible. The shot focuses on Seth’s face while flashing briefly to images of a bloodied bed & walls. This scene is harrowing, particularly as Richie is so blasé about it.

The brothers take the Fullers hostage on the instructions of going across the border to Mexico in the RV. There, Seth promises he will release them once they arrive at a bar called, the Titty Twister. There the pair are meeting a Mexican drug-lord called Carlos who is going to help them get away from the authorities. 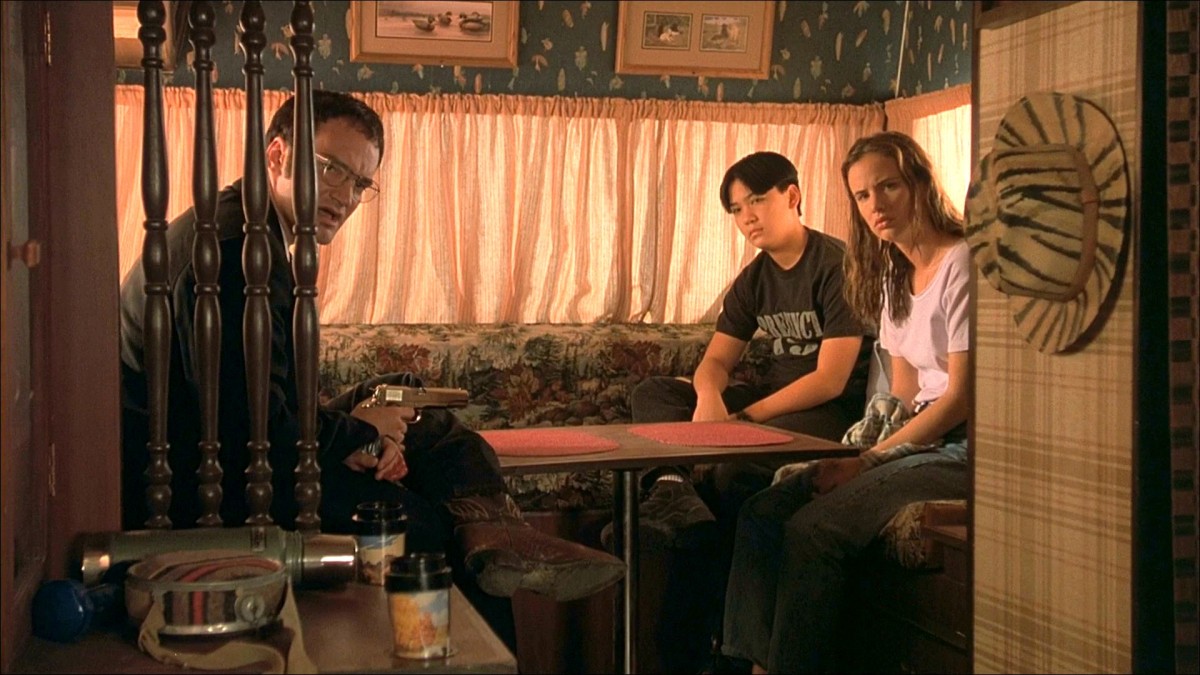 The first half of the movie is all about the characters & how they interact. Clooney & Tarantino are incredible together, dangerously believable but with plenty of humour & brotherly love. It’s hard to not crack a smile when Seth tells Richie to put his ‘bit in’ because he grinds his teeth. This man is a multiple-time murderer currently holding a gun aimed at Scott & Kate all the while imagining having his way with the young woman.

There is no faulting the acting from anyone here & if the rest of the movie had just been this, it would still have been very enjoyable. This movie is about to go off in a very different direction, one that divides fans but remains incredibly fun. You see the Titty Twister is a front, a bar open from dusk until dawn because it’s filled with vampires. After enjoying a very seductive dance from Santanico Pandemonium (Salma Hayek) the sight of blood sets her off & suddenly the entire bar is under attack from thirsty vampires.

On first viewing, not knowing this was coming…well, it was a hell of a surprise. It’s brutal & very gory resulting in a lot of death. Whatever bad feeling existed between the Geckos & the Fullers is lost as it now becomes a desperate fight for survival. 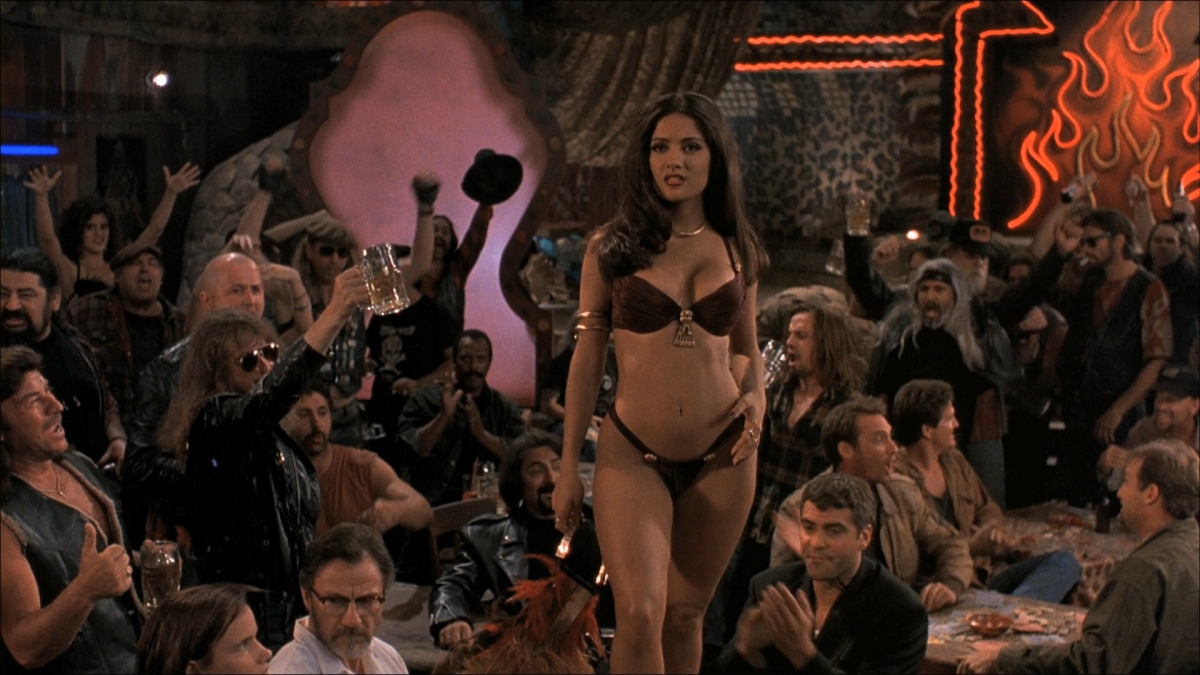 The latter half of the movie is cheesy, silly but a lot of fun. Everything is turned up to 11 with over the top effects, fights and a fantastic vampire bat sequence. It’s non-stop and easy to sit back and just enjoy, at least the first time. On repeated viewings the mistakes & issues become more obvious. 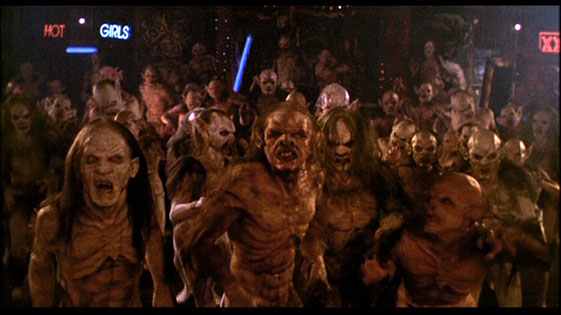 When the vampire bats get inside & the survivors decide to fight back against them is one of the more exciting parts of the movie. While grouped together the vampires here look amazing, twisted monsters which are clearly lower versions of those that reside in the bar. What isn’t so good though is their behaviour…there are so many of them yet they hang back, watching while their buddies are killed. Several can be seen just standing around in the background and one wanders off as if it is leaving the set.

When they do manage to get their hands on someone it’s always after an important scene has just taken place. They stand around letting characters talk & have moments before striking! It’s painful to watch…

As well certain characters that we met in the bar are just a little too cheesy to be anything but laughable. Take Sex Machine for example, played by the legendary Tom Savini, his dialogue is awkward & the transformation scene dragged out. 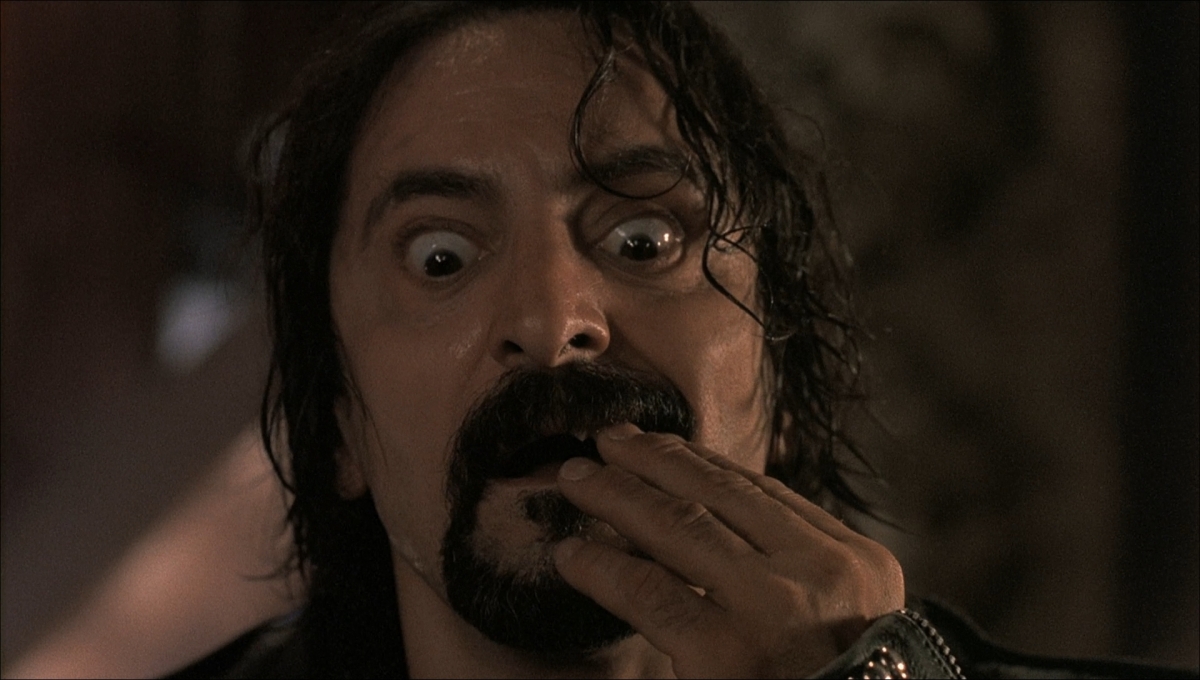 Thankfully the movie knows when a fun thing is being dragged out & ends before it gets boring. A zoom-out ending suggest that there is more of a story than just a vampire bar. It’s a nice mystery that didn’t need investigating.

From Dusk Till Dawn is a movie of two halves. The first, a character driven heist/hostage flick and the second a slapstick vampire horror. Both have their positives and negatives but together make a well acted, visually impressive & fun movie. “Did they look like psychos? Is that what they looked like? They were vampires. Psychos do not explode when sunlight hits them, I don’t give a fuck how crazy they are!”

From Dusk Till Dawn