“My sister sent me a postcard, all it said was ‘Come to Paris. It’ll be good for you.’ 48 hours after I arrived, she and everyone I’d met were dead.”

I shouldn’t have bothered…

Victoria, an anxious & uptight woman is invited to Paris by her sister, Carolyn (played by the singer Pink). We know she’s anxious as she is subjected to a bag search at the airport & her anxiety pills are found, that & she constantly pulls faces. 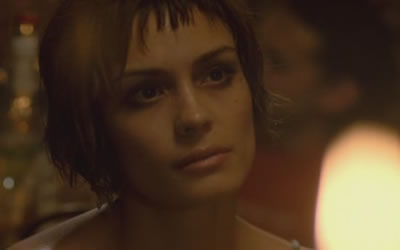 Upon meeting her sister we kind of learn that their relationship isn’t that strong & maybe this is an opportunity for the pair to reconnect. Carolyn wants to take Victoria to a secret underground rave in the Paris catacombs, initially Victoria doesn’t want to go but agrees in the end. There we see a horrible speech by the party’s host (bad acting, strong accent & coming from the kind of guy it’s easy to hate) who is friends with Carolyn. He takes them to a separate area of the rave, a VIP section.

There the group plies Victoria with alcohol (Absinthe) & tell her the story of the killer, Antichrist. A product of a Satanic cult, he stalks & feeds on those who get lost within the Catacombs. Unwilling to go skinny-dipping she storms back to the party but would you believe it? She gets lost! She eventually runs into her sister; the pair argue before Carolyn is attacked & murdered.

Victoria manages to evade the killer & arrives back at the rave just in time for it to be broken up by the police. She is knocked unconscious during the panic & wakes up alone & trapped inside the catacombs.

Will she escape before the Antichrist finds her or is her fate just to become another meal of the psychotic killer?

It’s very hard to care…she isn’t a likeable lead & far too much of this movie is focused on her tripping her way through the dark catacombs. The film is dark, very dark & it’s a real struggle to make out what is going on half the time. It makes for a frustrating watch. Combined with the sub-par acting & nonsensical twist (yeah, there is a twist that just boggles the mind but not in a good way).

The final scenes are the only really enjoyable part but I can’t go into detail without spoiling the twist. Put it this way…like the opening line there aren’t many survivors at the end but not because of the reason you might think.

You’ve seen it all before, an interesting location doesn’t make up for the bland story, poor acting & the constant darkness.