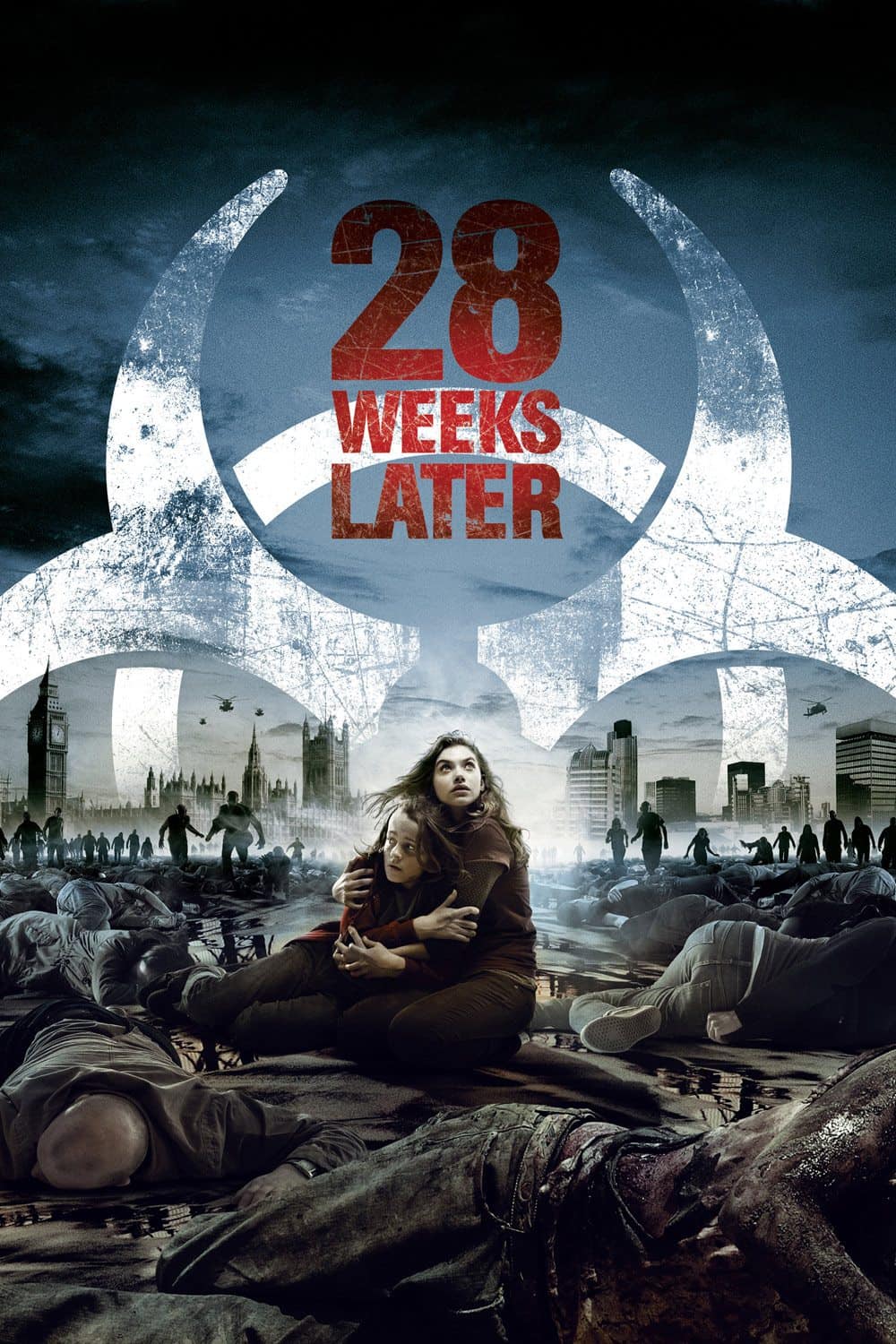 28 Days Later was a film that probably didn’t need a sequel. Any sequel would be hard-pushed to match let alone better the quality that evident throughout the first.

5 years after its release we have our sequel, cleverly titled 28 Weeks Later.

Opening during the initial 28 days of the first movie we meet Don (played by an excellent Robert Carlyle) & his wife, Alice (played by an excellent Catherine McCormack) who are hiding out in a farmhouse outside London alongside a handful of other survivors. After answering the frantic calls of a young boy who they allow inside they discover he was followed by the infected.

Under attack almost all the survivors are killed & Don abandons Alice (I kind of have a different view on this that I will get to) escaping to a motorboat nearby.

This opening sequence is incredible & harrowing to watch. It’s a great reminder of the threat the infected pose, just how quickly the virus spreads & the danger that comes from even one at your doors. The shot of Don running for his life while chased by 20 infected is terrifying. 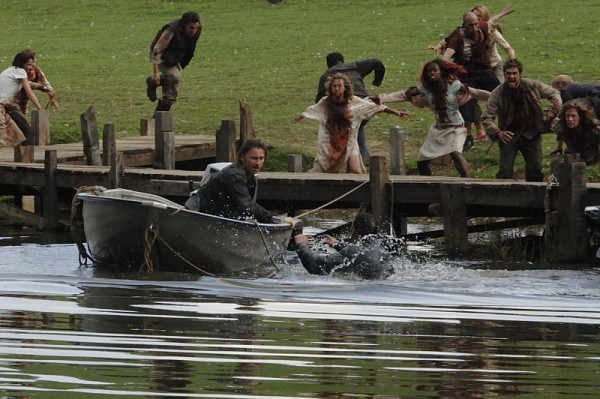 Over the next couple of months the infected die of starvation & London is declared infection free. 28 weeks after the initial outbreak the Americans come to help re-populace London bringing in the first settlers. Among this group are 2 children, Tammy & Andy who are the children of Don. They were at a boarding school in Spain when the outbreak hit & haven’t seen their parents since.

Don, having hooked up with the army now uses his engineering skills to keep District One (safe zone on the Isle of Dogs) going. His skills seemingly so in demand that he as an ‘access all areas’ pass (this will come up again later in the film).

Re-united with his kids Don is quizzed about the exact events that saw the kids lose their mother. He tells them everything but leaves out the crucial part about him leaving her instead implying he saw her die. 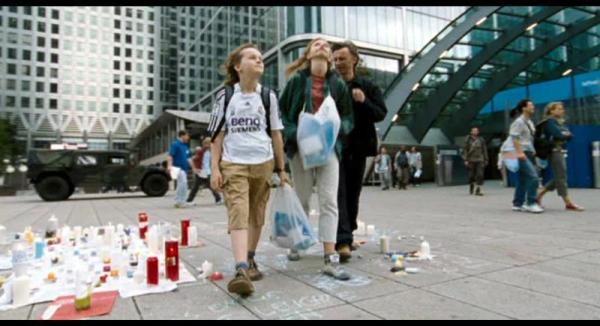 I’m not sure if I’m supposed to think Don is a bit of a git for leaving his wife. You see, she was as good as dead as far as I can see & he would have been dead as well. Considering they had 2 children survival was quite important, these aren’t slow moving zombies but violent fast infected that can change you within an instant. What else could he have done? He didn’t have a weapon & the infected were in the room. Seems to me like he made a choice that kept a parent alive for his kids. 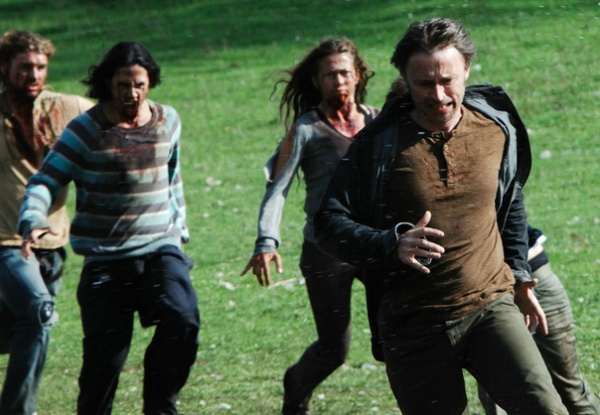 Anyway, life seems good in District One if not a bit restrictive thanks to the huge military presence, the area being protected by a group of snipers. It’s these guys who see Tammy & Andy slipping out of the safe zone. Why do they do this? So they can get a picture of their mother for Andy from their nearby old home. The infected might all be dead but the risk of disease, wild animals & other potential accidents suggests these kids are wilfully stupid.

It is a good chance for them to show off the destroyed & decaying streets of London. It’s not quite as effective as the first film but that sense of isolation is paramount & the spookiness of the silent dead streets is haunting. 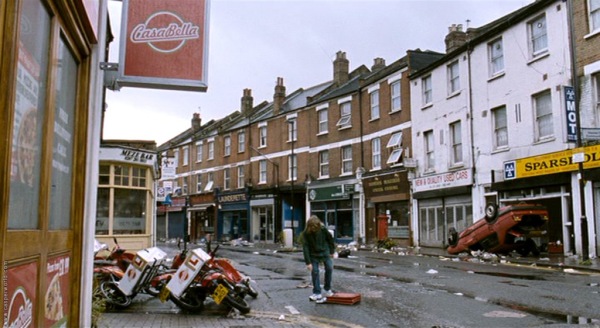 Arriving at their house they discover their mother alive but in a semi-feral state. She isn’t an infected but something isn’t right with her. The kids & her are picked up soldiers & returned to District One. Alice is put in isolation & upon testing discovered to have the virus but in a dormant state. She isn’t showing any symptoms but she can pass it on to others, this makes her highly dangerous.

This danger is realised when Don visits her & asks for forgiveness. She does & he kisses her & is promptly infected. Here we go again… 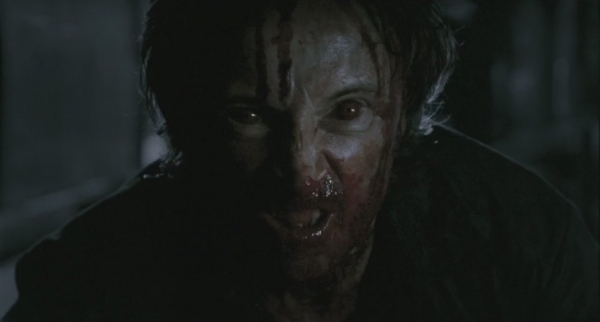 Don’s change is as brutal as Frank’s in the first…this has got to my favourite part of this movie. I found Don to be a likeable man who loved his wife & kids. He made a snap decision & has had to live with it but now he’s paying with his life. The way in which the virus takes over is incredibly brutal, twisting the body & destroying the man until there is no humanity left.

It doesn’t take long for the military to lose control of the base with infected Don going on a rampage that just spreads the virus like a fire. Months of work undone in a kiss…

What follows is the attempted survival of Tammy, Andy, a medical soldier who thinks Andy has the cure in his blood & a sniper who abandoned his post when told to fire on everyone, not just infected.

They have to work their way across London to meet his helicopter pilot friend who can take them to safety in France. However the infected not destroyed in the military’s fire-bombing have broken out of District One & are in hot pursuit. 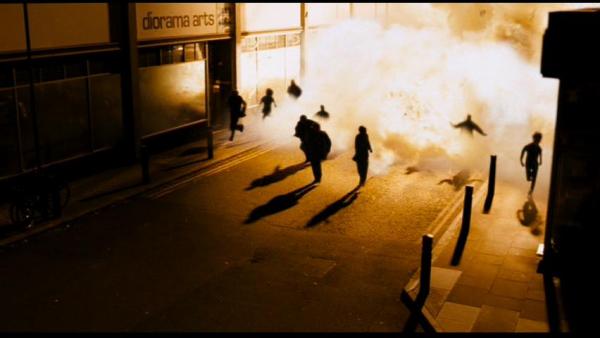 28 Weeks Later is jam-packed movie with an interesting story, plenty of action, extremely dark moments (the flamethrower bit is a tough watch) & is just a generally entertaining watch.

Other than Don though there isn’t any real character that stands out in the same way as the first. Whereas 28 Days Later had a cast that compelled you to watch their every movement & listen to their every line here we have a few to many bland characters. Andy in particular is an irritation & for a boy of his age he sure behaves like he’s much younger. His sister could be anyone & as the older of the two she should have known better than to sneak out of the zone. 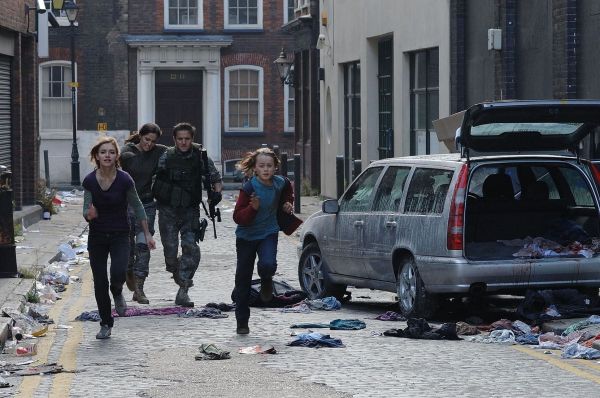 Talking of which the ease in which the kids get out of District One is laughable. They don’t seem to get challenged at any point & if the sniper hadn’t seen them, who would have known?

The use of the music is as impressive as it was in the first…the 28 Days Later theme is used to great effect here. It’s a sorrowful yet threatening piece of music that stays with you long afterwards.

Finally unlike the first movie we get an ending that is more fitting for a movie that is filled with bleakness throughout. The final scene being the infected running out of a train station to reveal that it has now spread to Paris.

I really hope we get another film one day, these stories told like this are incredible to watch.