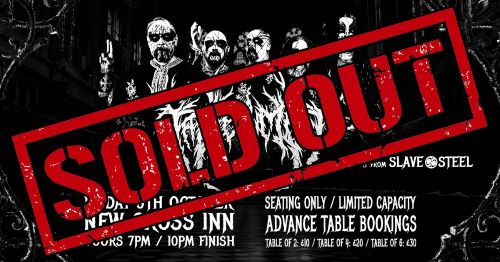 It was March 4th and COVID-19 had grasped the world in its grip. Just a few weeks later, the UK followed many other European countries and went into lockdown. All live shows were postponed and/or cancelled. March 4th was the last live music show I saw of 2020 and for the longest time it felt like that would be it until at least Spring 2021.

The idea of limited capacity/socially distanced/seated only shows just didn’t seem possible and for most venues, that has proven so. However, slowly but surely and with a massive amount of government restrictions in place, some venues have started to try. One such place is the New Cross Inn situated in New Cross, London.

On a chilly October night, with the virus seemingly growing in strength and further restrictions sure to come, metal was finally on the cards.

First up was Slave Steel, a London based thrash, death and groove heavy metal band. Kicking off their short set with a bang. No, seriously. I don’t want to sound like an old man but bloody hell is it loud! So loud, that the first couple of minutes is a bit of a mush dominated by the percussion. Thankfully, it settles and while it stays at ear-drum erupting levels, the intricate details of the band are much more noticeable. There’s a ton of kickass groove to the guitars and the vocals are on fire. 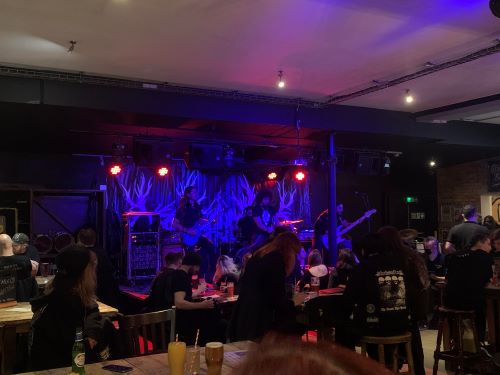 Also from London are the headliners, Tableau Mort. A fiery black metal band with layers of atmosphere and gloominess. It’s the kind of music that is so fitting for the world we currently live in and seemingly aware of the importance of this kind of show, Tableau Mort have brought it.

Not only does their black metal music sound immense but they’ve brought atmosphere and style. The band in outfits befitting of a Satanic rite and throwing in little touches like frontman Stefano pouring a goblet of blood over his head in the latter stages of the show. The darkness rolls outwards from the stage, the scorn is powerful enough to make the eyes water and the melodies are emotionally captivating.

The UK has its fair share of promising black metal bands but a name that should be on everyone’s lips based off this performance is Tableau Mort.