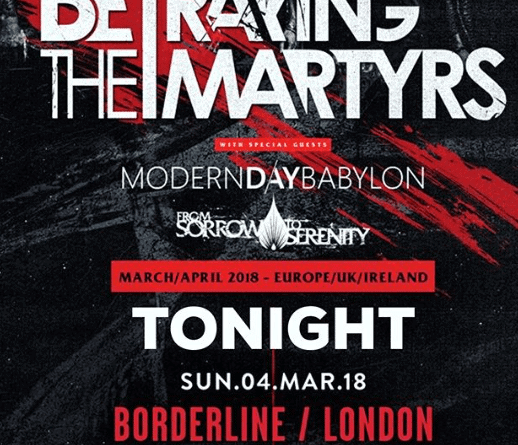 Betraying the Martyrs are a French symphonic metal/metalcore band founded in 2008. They have been touring steadily since the release of their 3rd album, The Resilient, in January 2017 via Sumerian Records. It is an album I really like, having become sold on the band off the back of that album’s lead single, Lost for Words.

This London date is the 4th stop on an 8 consecutive day tour around the UK and Ireland. Originally planned to be at The Garage, Islington, the venue changed at the last minute, presumably due to ticket sales. The main room at the Garage has a capacity of around 600 whereas The Borderline is more 200 to 300 and it isn’t anywhere near full.

The tour is called the “Still Resilient” tour and, being a cold, damp Sunday evening in London coming off the back of some Arctic weather conditions, it does show the fans as not quite as resilient in coming out in support of Betraying the Martyrs. A few train delays held me up in getting to the venue – I arrived just before 8pm so missed opener From Sorrow to Serenity. Main support band, Modern Day Babylon were just finishing setting up as I arrived so got to catch their whole show.

I have never heard of this band and was a little concerned for them as there were exactly 12 people watching them as they started their set. Thankfully they persevered and performed which dragged people out of the shadows to watch what was happening on stage. Always good for a band if the lurkers suddenly feel compelled to come forward. Modern Day Babylon are a three piece with a difference, mainly in that there is no singer. They were quite industrial metal sounding. They had a load of energy and put on a decent performance with the drums literally and figuratively front and centre, where you would normally expect the frontman to be.

The music was drum heavy with huge riffs and crunching beats though the added 4th member of a computer with sampling and programmed guitars wasn’t something I have a lot of time for. Still, that was made up for by the amazing skills of the drummer, both in his rhythmic prowess and incredible gurning. There is a reason why drummers are usually hidden at the back. Great warm up though and you can find out more about these guys from here.

With a small stage and no real back stage area, there is a long wait as Modern Day Babylon disassemble all their equipment and carry it out while Betraying the Martyrs start setting theirs up. I have never seen so many cables controlled by so many rolls of gaffer tape. Once Betraying the Martyrs are geared up and ready to go, the crowd swells. Whether they were all in the smoking area, or dotted around, the 50 or so people who joined by the end of Modern Day Babylon suddenly feels more like 100.

Betraying the Martyrs get straight to it with Lost for Words from the newest album. They sound strong and pour out a ton of energy as they demand interaction from the crowd. It’s near impossible not to get involved with the infectious charisma from frontman Aaron Matts reaching out to all corners of the room. Clean vocalist and keyboard player Victor Guillet has a similar energetic demeanour and seems popular with the ladies as they all gather in front of his side of the stage. Assuming they weren’t gathering around me of course?

The band jostle for room as the tiny stage tries to accommodate all 6 band members. They launch into Where the World Ends, from their second album, Phantom. It really is an impressive start. I can’t help thinking they deserve a bigger stage and bigger crowd. There is a long break after this track though as a bit of equipment has broken so Matts cracks some actually funny jokes with the crowd while they wait to restart. When they do, the slight lull has taken it’s toll on the now static crowd but it doesn’t take long for Martyrs to get everyone moving again with the huge sounding Wide Awake. Unfortunately another track in and the same thing happens again, a piece of equipment fails so Matts tries to keep everyone entertained by thanking them and the other bands. 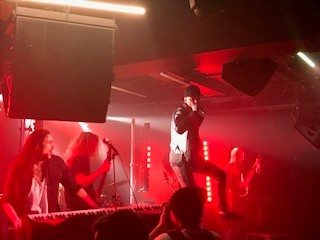 Another restart and you really feel momentum should be lost now but to be fair to the band, it really doesn’t take long for their energy and crunching breakdowns to have everyone head banging again. The band jump back to their debut release, Breathe in Life and play Man Made Disaster and we get our first pit of the night and also the most comical moment of the night.

Picture this. The pit starts up, a security guard dashes across the floor to break up what he believes to be a fight. After he manhandles a few people to “break it up” a few others manage to explain to him that they aren’t fighting, this happens at metal gigs. The poor guard looked baffled but eventually everyone laughs it off and the pit gets going again. Brilliant.

The band are still going strong and I am properly impressed with their sound and energy but even more so in how much fun they seem to be having. They mess about on stage, all smiling, all happy and grateful to be up there. Exactly what you want to see from a band.

The pit swells as Unregistered is played before the penultimate track, (Dis)connected literally shakes the building with it’s neck damaging breakdowns. The band are good enough that nobody tries to slip off early as they finish up with The Great Disillusion. A beast of a track and one that leaves the small but sweaty and appreciative crowd cheering long after the band have said goodbye.

Despite being marred with small issues, Betraying the Martyrs really brought a crushing show to the small London crowd. Equipment failures, a small stage and an overly enthusiastic security guard did little to dampen spirits. It was a truly enjoyable night purely because Martyrs were bloody good. As for the venue, their sound was spot on but it should be in such a small place. I have nothing else positive to say about the venue though.

A huge column in the middle means the crowd are split in half. Careful positioning is needed to be able to see the whole band. An ill-informed security guard could have been avoided too. More irritatingly though was the fact that they had barely any beer. The bad weather meaning they hadn’t had a delivery. Instead, to cover their losses, they were selling cans of either Red Stripe or Budweiser. Just normal cans and each one cost £5. That is extortionate. 2 doors away at a local grocery store they were selling the same cans and they were 6 for £5. For all we know, this is where The Borderline were getting theirs from. Profiteering off of music fans is disgusting. They didn’t even bother to pour them into a glass for you, just handed you the can in exchange for your fiver.

Thank god Betraying the Martyrs were there to keep everyone’s spirits up, and they did. Musically tight, enthusiastic and damn heavy. Next time these guys are in town, you have to get to see them. Hopefully at a different venue though.

You can pick up music from all three of these bands at the links below. Find out more about Betraying the Martyrs over at their Instagram, Twitter, Facebook or on their own website. Be sure to give them a like or follow. Why not try to catch them on some of the remaining dates of this tour, below.