The Rig is a low budget horror movie set on an actual oil rig. That there is the main appeal of this ‘could be a SyFy but isn’t’ movie.

The plot sees a small crew on an oil rig forced to batten down the hatches as a storm rages outside. Ensuring nothing goes wrong ends up being the least of their worries. Something has climbed aboard and is now stalking the halls, picking off the crew one by one. With no way off the rig and the storm causing issues with communications, the survivors will have to use all their skills to survive against their deadly foe.

One of the more surprising things about The Rig is that it spends time trying to build its characters and creates several subplots. From the conflict between the chief Jim (William Forsythe) and worker, Dobbs (Scott Martin) over the latter’s relationship with the former’s daughter, Carey (Serah D’Laine). To the family issues that exist between brothers Freddy (Stacey Hinnen) and Colin (Daniel Benson). The latter wanting to step out of the former’s shadow. None of this stuff is particularly amazing or that interesting but it is nice to have it none the less. 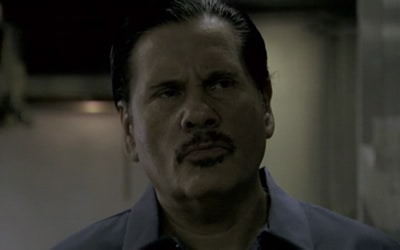 When the film shifts focus to the monster lurking in the halls, it gets a little peppier but its premise is so familiar. it’s hard to get too excited about it. It’s Alien but on a rig and nowhere as good, of course. It has plenty of threat and the characters react accordingly, it’s just not the most inspired looking creature even if the effects are decent.

In fact, visually, the movie looks decent overall. The setting, an oil rig that is now a museum, is different. Although it is pretty obvious at times that it is not a functioning rig. One character even wears a t-shirt advertising the museum in the movie!

There is entertainment to be found here. Not much and all the early character build amounts to nothing when it comes to the monster, but it’s not a horrible film. Don’t expect scares, don’t expect thrills and don’t expect a great horror movie and you won’t be disappointed.