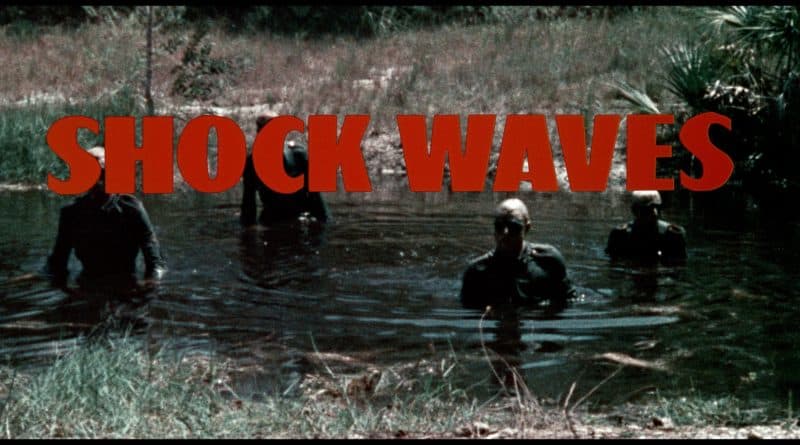 Shock Waves subject matter is one that I always approach with a sense of trepidation. Nazis…they don’t really fit within horror. After years of Naziplotation nasties it’s hard to even want to watch any Nazi themed horror from the 70s & 80s.

Ultimately too, it’s low budget nature means the eerie elements of the movie fall a bit flat. It expects the imagination to fill in far too many blanks.

Rose (Brooke Adams) is found floating in a dingy by a couple of fisherman. Once aboard she recants the tale of what happened to her.

She was part of a group of tourists out at sea on a small commercial boat captained by Ben Morris (John Carradine). The boat ran into trouble when the engine went faulty. Before repairs could be properly made they were side-swipped by a huge ship seemingly appearing out of nowhere.

In one of the best moments of the film, Captain Morris sends up a flare to reveal a huge, rotting ship in the distance. It’s incredibly eerie & leaves you with lingering thoughts of what could be aboard.

The next morning the Captain is found dead & the group are forced to get in the lifeboats. They make their way to a nearby island when the boat starts taking on water. Once on the island they discover a derelict hotel with a lone man living inside. Played by Peter Cushing, he doesn’t want them on the island & is visibly bothered by their story of the rotting ship.

As more of the group begin to turn up dead, the man reveals that he was the commander of a special unit of Nazi soldiers. They were experimented on to make them invincible. It worked but the unit was far too difficult to control. So when the war was lost for Germany, the commander sunk the ship with the invincible unit aboard.

This is the ship that the group saw meaning they’ve returned to the surface. The Nazi zombies set about killing everyone until only Rose remains. As we saw at the beginning of the film, she escapes only to end up in a hospital for the insane.

There’s really not much to say about Shock Waves. It’s so devoid of excitement that even the great Peter Cushing can do little to revive it. Unsurprisingly he is the best thing in it but the rest of the cast do a decent enough job. Mostly forgettable characters, it’s hard to care one bit about what happens to them.

A lot of time is given over to the plot but it’s so bare-bones it begins to feel like filler to pad the run time. The zombies are nothing special & it’s kind of funny to see them all wearing ‘glasses’ that are clearly swimming googles for the underwater scenes.

By time the movie comes to a close most of what happened will have been forgotten. It just fails to excite, inspire or leave any kind of lasting memory.