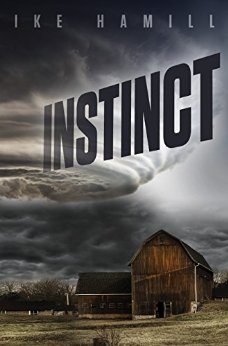 Instinct is the sequel to the enjoyable Extinct which itself was a different take on the post-apocalyptic genre following a small band of survivors as they tried to exist and then fight back against an unknown, but otherworldly, force that has decimated the population. The story picks up directly where Extinct left off, with an ever decreasing group striving to survive while on the hunt for other more like them.

Instinct was released in August 2014 by author Ike Hamill (Lies of the Prophet, The Hunting Tree and of course Extinct). As mentioned above, it is a direct sequel to the first book in this series, Extinct.

Please note there will be spoilers below in regards to the first book’s ending so if you want to read it, stop here.

Instinct carries on directly after the closing events of the first book which saw Robbie, Brad and the remaining survivors take the fight back to the force that had attacked the planet by attempting to infect it with truckloads of rotting corpses. We also learned that while it didn’t exactly go anywhere near to plan, due to the sudden reanimation of said corpses, the central orb of energy that seemed to represent the malevolent force did seem to be fading. What we didn’t know was whether it was destroyed or just delayed.

Instinct feels very similar in the way it is written, obviously Ike’s own style, and in how different story lines are progressed. The remaining characters of the first book such as Robbie and Brad are in one group, a group that went separate ways in the first book return in this with Judy and Luke being the main characters there and a new character, Tim, and his dog Cedric are introduced. Their stories are progressed chapter by chapter, so we have one about Robbie and Brad, the next about Judy and then one about Tim and the cycled is repeated.

Each story line is progressed bit by bit until they eventually reach a cross over point and their stories become one, almost completely interlinked. I quite enjoy this style and find myself wondering how far they are from each other as I read though I have heard other reviewers mention it can get confusing. I didn’t feel that though.

We start with Robby, Brad and a few others who are on the move, looking for a place to hold up and we find out that Robby is in a bad way. His exertions at the end of book one have left him in some sort of trance like state which requires him to be looked after like a child. Some of the group think he should be left behind while some others, particularly Brad, believe he is just lost in his own mind trying to find a solution to their predicament. Luckily they don’t leave him behind as it turns out to be the latter.

We also check in with Judy and Luke where we find Judy is not overly happy with her situation. Luke, the self-proclaimed leader of this second group, is leading them to a farm which they believe to be some sort of safe zone though they appear to be lost and not very safe at all. Finally we meet a new guy, Tim, and his dog, Cedric, who are in a small plane flying through the sky and on the lookout for other survivors.

It is Tim’s story that I probably enjoyed the most in this book. One of the things I was impressed with in Extinct was the strong character development and with so many of the characters being already developed, that is a bit lost in this story. With Tim and Cedric being new characters, and meeting more on their journey, they were also given the full back story and development set and in a way it made me care more for these guys then I did for most of the older characters.

Back to the story and with Robbie now back to himself, but more knowledgeable about what needs to be done, they set off on the hunt for the symbols left scattered about by the invading forces that were touched on in book one but now have an elevated importance. They soon find these symbols are placed in a large circle, on a map, and the centre of that circle? A farm, the same one Luke and Judy are looking for. Luke and Judy do eventually find the farm and set up camp there with a pretty large group of survivors.

Luke, however, runs it like a dictator and even has his own security forces known simply as the bearded men who have appeared out of nowhere and are definitely not legitimate. Luke’s methods are not welcomed by Judy, who is convinced that there is more going on at the farm than they are being told, especially as it becomes clear that they are not allowed to leave. Meanwhile Tim, who on his flight travels has also come across the symbols and plotted them on a map, decides to also head for the centre. He has an eventful journey though as he meets a young couple who are completely nuts and try to kill him and his dog before eventually turning out to be not so bad, and he also meets a gentle giant who turns out to be quite the hero.

So, like missiles heading for a target, Robbie’s gang and Tim’s gang are all on collision course for this safe farm where Luke and Judy are.

As you would expect though, nothing is quite as it seems at the safe zone as the ending of the book comes at explosive pace with underground government bunkers, a collection of people who were aware of the incoming invasion and are planning to sacrifice everybody there to stop it, alien sympathisers, victims and those who fight back. With the alien force back with a vengeance, can Robbie find a way to stop it without needing to sacrifice every last remaining survivor? Well, you will have to read it and see.

While I did enjoy Instinct, it wasn’t quite as interesting as the first one though I think that is mainly down to the lack of character development due to most characters already being fully developed. I do still believe credit is due for the unique angle on the apocalypse as the invasion is both creepy, believable and relatively unique. The ending this time though didn’t quite work for me as the introduction of the government agents and the conspiracy regarding the invasion being expected are not very unique at all and so feel a little at odds with the rest of the story.

One other thing this story has in common with the first is spelling and grammar errors. It is littered with them, especially in the last few chapters, and that is really unwelcome. Please employ a proof reader.

Strangely enough this story felt like it had an ending this time but there is a third, final book in the series, called Black Friday which I will be checking out though with a little less anticipation than this time round.

A weaker story than the first with spelling mistakes everywhere but it is still worth a read, even if that is mostly to continue on the first books good start and find out what has happened/is happening with Robbie and co. Overall there are plenty of good things in Instinct to hold interest, especially Tim’s story, but it just falls a little short.