Maybe it’s the abundance of rubbish free-to-play games that is pushing me to find & play more games that charge you up front. Just pay for your game, no hidden or extra costs…we hope you enjoy it. You know, like how all gaming should be?

The amount of quality games now on iOS continues to blow my mind & there is so much to discover as long as you’re willing to sift through the dregs. This is how I found Goblin Sword…

Costing only 69p it is possibly one of the most incredible value games I have ever played. The game is an action platformer playing out in the 2-D perspective using cartoony-style/pixel art visuals. I think it looks great & is a wonderful throw-back to platformers of old. It manages to give an 80’s impression while still looking & feeling modern…it’s retro at its best.

Your unknown hero must traverse 3 parts of the world to destroy an evil sorcerer starting off in the Great Forest before going to the Ancient Castle & finally ending up in the Dark Caves. Each area has 13 levels, 2 boss fights & a bonus level that is unlocked once certain requirements are met.

Controlling your small pixelated hero is easy with 2 directional arrows perfectly placed for your left thumb to control & an A & B on the other side for your right thumb.

The B button is your jump button…double taps it for a double jump. The A button swings your sword to attack enemies & you can pick up blue orbs that increase your swords power for a limited time.

The game manages to get some of the most well-balanced gameplay I’ve seen in an iOS game with levels being short but you only having 3 hearts (more later) to finish it. Lose all your hearts & you have to start the level again. It sounds punishing but it really isn’t as it relies on your skill improving as you make it further.

To help you can visit a merchant on the map screen who will sell you weapons, armour & relics. Money is gained by picking up coins & gems throughout levels & a hefty amount is needed to buy the best equipment.

There is a huge range of weapons that can really make the difference in later levels but the armour is for cosmetic purposes only & offers no extra protection. Relics however are incredibly useful as they offer bonuses such as increased magic meter or a triple jump when equipped.

Not everything costs though as throughout every level are 2 hidden chests that contain new weapons, armour & relics as well as gems, health potions/heart increase containers & coins. Finding them can be tricky but add extra challenge to an already satisfying game. Each level also has 3 blue crystals that need to be collected to access the next map area. Collect every crystal in every level in an area & you will unlock the bonus level….be warned though they are fiendishly tough.

The game bosses split the areas nicely with 1 being halfway & the other being the last. They can be difficult & take some trial & error to learn their patterns. Once you do though…they fall as easily as a standard enemy.

Finally there is a Home section on the map that shows you souvenirs that you’ve picked up throughout & quests…an extra tab that sets additional tasks such as ‘acquire all weapons’ & ‘beat a level without killing an enemy’. In no way are they necessary to do but add more replay-ability to the game.

If you spend 69p today then spend it on Goblin Sword, you won’t be disappointed. It’s fun, rewarding & challenging with few negatives. 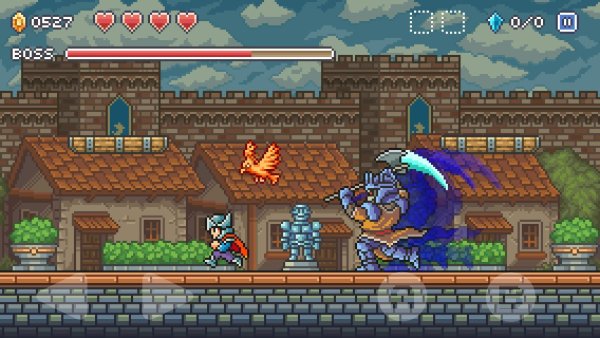