I loved Zoo Tycoon, I really did. I still really like it but the more I played the more its flaws became painfully obvious, none more so than the ‘zoo limit’, a bar that fills up as you place more attractions, buildings, adopt animals or add decoration. This wouldn’t be such a problem if it wasn’t so restrictive or it was something you could increase as you level up, paying money or researching.

The zoo limit turns Zoo Tycoon from a great game to a good game; it fills up far too quickly limiting you to a very small amount of park space. It’s made worse because you can see the huge amount of expanse you could build on if the game would just let you. 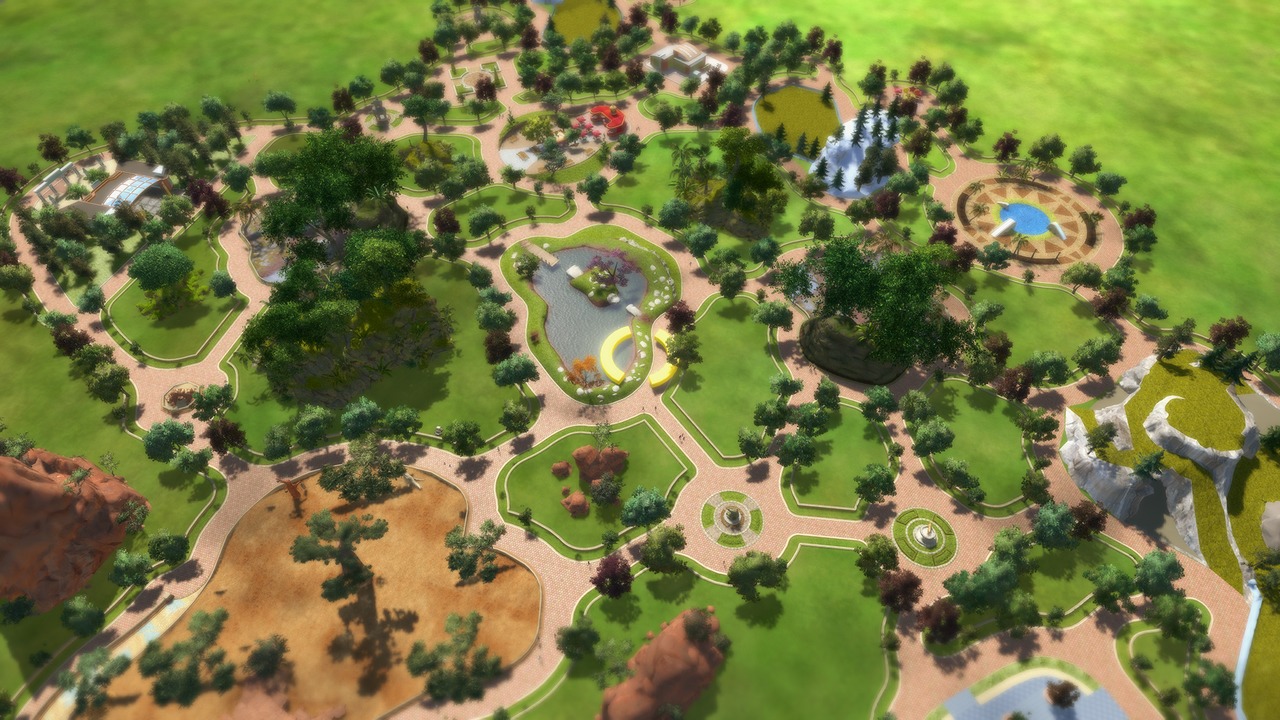 So gameplay is straight-forward, you are the zoo keeper charged with building a park filled with all manner of fun & interesting animals, shops & sights for people to enjoy. It’s your job to keep your animals fed, watered, entertained & happy in their surroundings as well as meeting your customer needs. Think Theme Park but in a zoo & way more restrictive (you’re going to read that word a lot in his review).

To fill your park with animals you first need to choose an enclosure environment such as Savannah, Tropical or Tundra (you need to put the right animal in their preferred environment to keep them happy). These come in different sizes with the larger ones giving you increased space for more animals & food/entertainment. 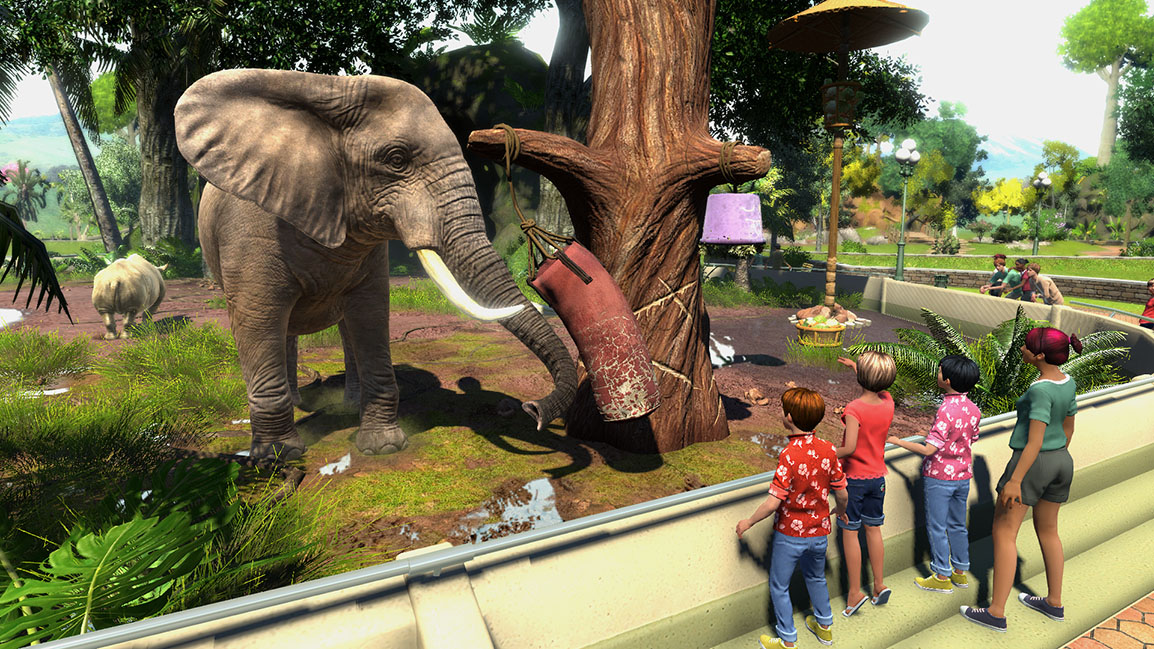 The list of animals you can adopt include different species of Lions, Tigers, Elephants & more. Very few are available from the start…that’s where increasing your park fame & researching comes into it. Your park fame increases as your park grows unlocking more animal species, shops & decorations along the way. It’s not difficult to level your park fame up at first but once you reach level 30 & your park is pretty full it gets quite tough.

With no room to build any more buildings you’re stuck trying to upgrade stuff & change how your park is set up.

Although you can build shops & entertainment for your guests, the majority of your efforts will be focused on the animals. Thankfully to help you keep them fed, watered & clean you can hire staff members to assist as well as janitors to keep the park clean & breeding researchers. Yep, put a male & female together, get the ambiance right & if you’re lucky they will produce children! 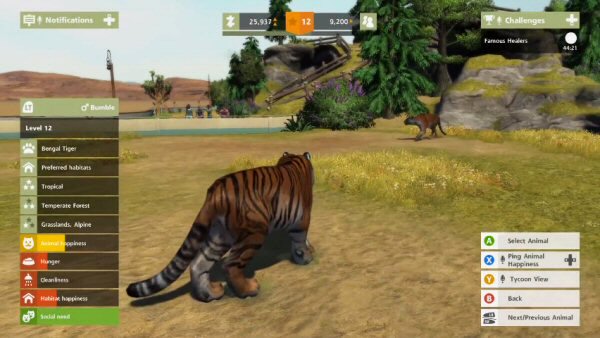 Considering how expensive a lot of the animals are (particularly the endangered species) this is a sure fire way to keep money rolling in. Get your animals breeding & sell the kiddes for a profit!

Zoo Tycoon can be played from two angles but realistically you’ll be playing it from the same one I do…the top down view. From there you can move around quickly & see everything, zooming in & out when necessary. The other is the third person view where you can move your zoo keeper avatar around the park you’ve just built. From this angle you can also interact with your animals feeding them, washing them or playing games with them. 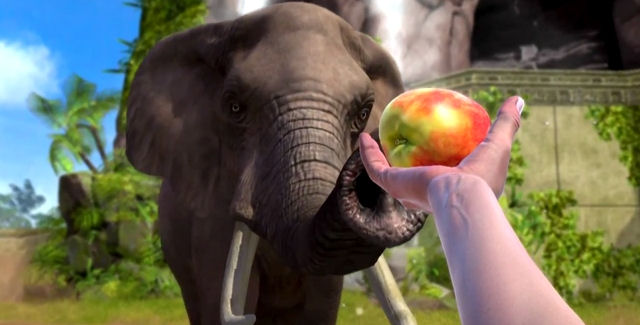 This is where Kinect comes into play. Oh, you didn’t know you can use Kinect, did you?

It’s basic Kinect stuff that involves feeding animals, washing them or playing with them. You don’t have to use the system as the controller works perfectly fine & is often just easier.

Zoo Tycoon features several modes offering plenty of challenge & fun. Campaign mode sees you taking control of ready built parks & meeting specific challenges under a time limit. Starting off simple & increasing in difficulty there are quite a few to get through & some can be quite tough. 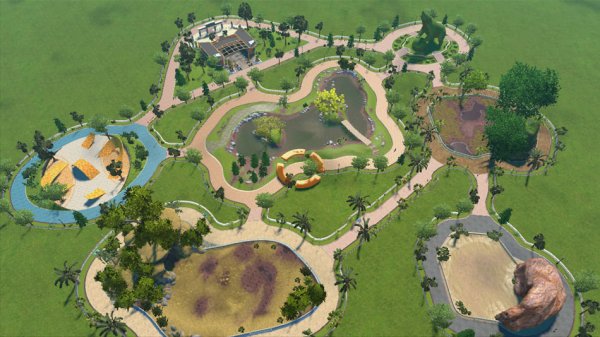 There is multi-player as well that allows up to four players to work on a zoo, upload it to the cloud & it can be shared publically too.

Graphically the game looks pretty good but I found t does suffer some frame-rate issues & slowdown when reaching high levels with a busy zoo. While playing in 3rd person the game has some embarrassing moments with the most obvious being the public that walk around the park. Walk or drive into them & you might as well not be there & in many a case they aren’t there as you go through them like a ghost.

It doesn’t affect gameplay but just looks a bit silly.

What does affect gameplay are the menus which are set up in such a way that you’ll spend far too long jumping between sections just to put a few bits in an enclosure. It’s not always clear which section has what you need & having to highlight every item & press a button just to see if it is suitable for your animal gets annoying after a while. 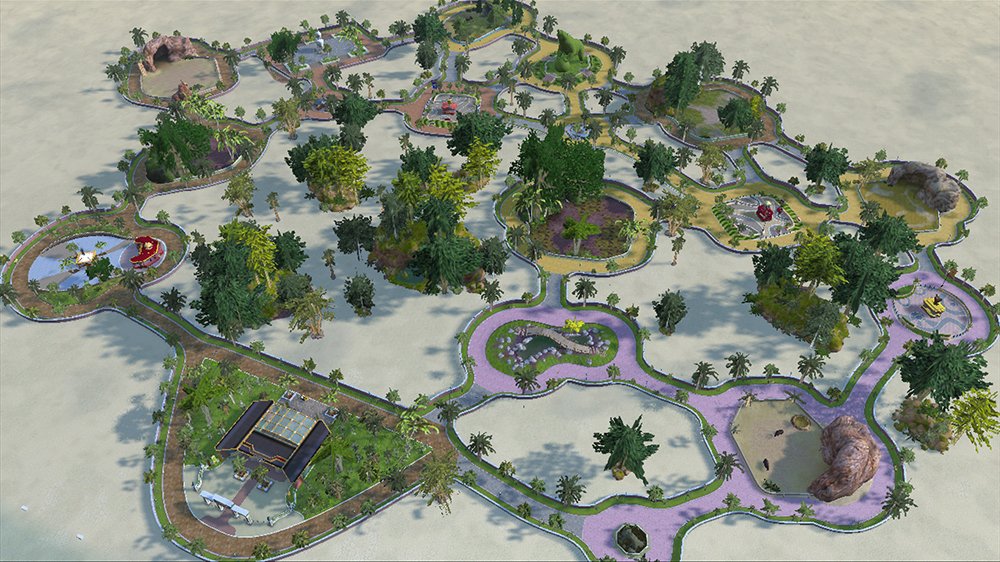 Once you’re used to it & know where things are it’s not such a problem but you really shouldn’t have to memorise menu options.

As bad as these little things might be the thing that knocks Zoo Tycoons score down though is always going to be the zoo limit, something that spoils the fun & makes things like freeform mode almost pointless.