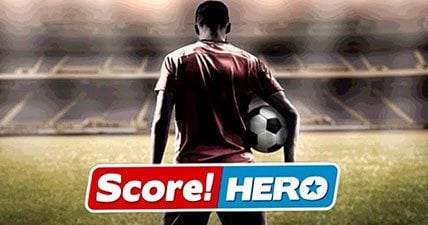 Score Hero is a clever, strategy based football game designed for mobiles that actually works really well on the small screen. Instead of ramming a directional pad and 4 buttons on to the small screen for our fat fingers to struggle with, it focus on slowed down, puzzle styled gaming.

This review is specific to version 1.76

Brought out on 2015 by developer, First Touch, Score Hero plays out in scenarios. You may jump into a game 2 nil down and the puzzle starts. The play stops, you have a view of the pitch and players in front of you and you draw lines on the phone from the ball carrier, to whoever you want to pass to. Work your way up the pitch until you are in shooting range and try to beat the keeper. Be the Score Hero.

You may be thrust into a game losing 1 nil in the 90th minute. The game plays and your team has a penalty. The animation stops and it is you on the penalty spot against the keeper to salvage a draw. You could be three nil up, taking a corner. Draw a line onto one of your players in the area. The animation kicks in and assuming the ball makes it to your player, will stop when it reaches them. Now draw a line towards the goal to hopefully score.

A simple sounding game, yes, but one that works so much better than the full 90 minute gameplay football games on mobile. The screen is just too small for them to ever work really well. Score Hero works, mostly. It is really nice to write up a review on a mobile game that has way more positives than negatives.

There is a great amount of content too. Currently standing at over 240 levels. 240 exactly in the main game but there are also bonus seasons added. These play out in a limited time which add another 10 levels on special occasions. Each scenario obviously has a main aim. Score a goal or multiple goals, to complete it. There are bonus missions to get stuck into as well. Score 2 goals with a header, score within three kicks, things like that. That adds a little more replay value in getting stars for completing the scenario. Complete the scenario and you get 1 of 3 stars, complete the scenario and the bonus missions and you get up to 3 stars. They aren’t pointless stars either. 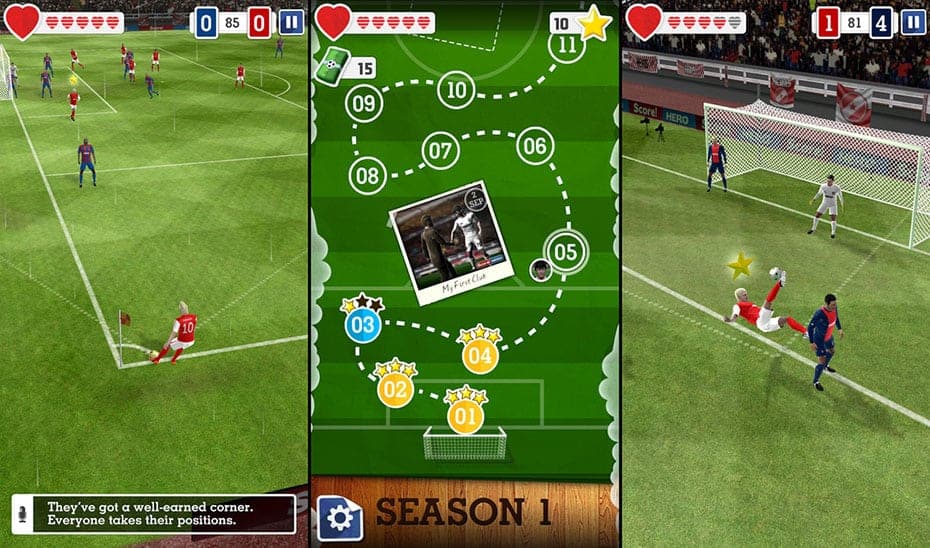 You work your way through a (kind of) simulation story. In this you choose a club to join, try to perform well for that club, get to play internationals and win trophies. You will need the stars to unlock each next season. If you finish a season having just got 1 star on every level, you are likely to find yourself replaying earlier levels to unlock more so you can progress into the next season.

Gameplay isn’t always as straightforward as it sounds, you will have to put a lot of thought into your next pass. You have a triangle of vision to work with and can only pass within that triangle. A bad first pass could leave your player in a position where there is no one in the triangle to pass to next. You have to try and match the pace of the ball to the running players movement, will have to thread it through multiple defenders, curl it around walls and even sometimes work backwards towards your own goal to try and create some space for a forward pass. Basically like real football.

If you fail, you lose part of a heart. 2 fails sees a heart lost. You get 5 hearts to use that replenish over time. You can also earn bucks through getting 3 stars on a level. Ten of them allows you to fully replenish your hearts. You can choose to watch an ad for a free heart, when you are desperate for one more go. Otherwise there are no ads in the game. You can also pay real money for a full replenish of your hearts. The time it takes to fill them up alone means you don’t need to do this though. Around an hour of waiting sees them all back anyway. Save your money and wait.

So to the negatives, of which there are not many. Score Hero tries really hard to make it a simulation by using a background story of sorts but it is pretty weak. The nature of the game means you cannot really make a choice. You can’t not perform well, if your are completing the levels. It is impossible to not be called up for international duty, if you are beating each scenario. You are playing to a script. The illusion of having any choice on your career is just that, an illusion. Score Hero is definitely gameplay over story.

In regards to the hearts system, they can be frustrating as you could use every heart up on a tricky level in 3 minutes and then be out of the game for an hour waiting for them to replenish. Back in and they are all gone 3 minutes later. Once you get to the point of more waiting than playing, the game starts to lose a bit of its magic.

The final complaint is around the AI, both on your team and opponents. They make some insane decisions making it difficult, sometimes, to work your way forward. A simple straight 5 yard pass to a player sees him run with the ball straight off the touch line 10 yards away. You fail. A well worked pass putting a player dead centre of goal sees him run himself to a corner. This gives you a field of vision that means you have to shoot but from an impossible angle you didn’t create. It doesn’t happen that much, and sometimes can be amusing, and add a little more challenge. You know, on the second play of the scenario you have to be like “right, I am not passing to that idiot” and instead try to find a different way to goal.

Minor complaints aside, Score Hero is, by far the best football game you can play on mobile for free. It is challenging enough to hold interest. There is a lot of content and will have you reaching for your phone the second the alert comes through saying your lives are replenished. Score Hero is one of the best example of developers understanding mobiles and how to make a game work within it’s confines. Excellent job, First Touch. Other developers should take note.