Most gamers will instantly feel at home playing Oceanhorn: Monster of Uncharted Seas as its gameplay is heavily inspired by The Legend of Zelda series. Explore dungeons, fight enemies with a sword & shield, fish, sail, throw pots & cut bushes to find coins? Sounding a bit familiar, right? Even visually the game draws comparisons to The Wind Waker.

Not that any of this could be considered a negative as what it lacks in originality it makes up for with a thrilling story, exciting, pretty locations & some really memorable music.

Oceanhorn: Monsters of Uncharted Seas was first released on iOS in November of 2013 with console ports finally arriving in September 2016. 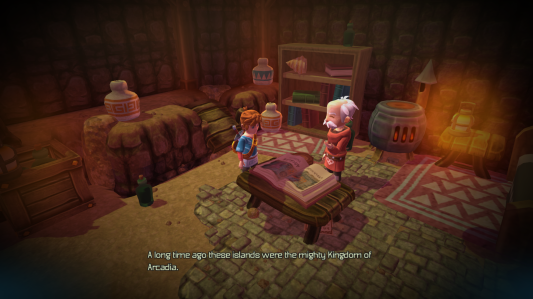 The story places the player in the shoes of a young boy who sets out on a quest to find his lost father & defeat the mechanical monstrosity, Oceanhorn. To do this players have to explore islands & the dungeons that reside on them picking up weapons & upgrades to make the journey to the final boss that much easier.

There are three major dungeons with three fun boss battles before you’re able to take on the sea monster & with cursory exploration the game can be wrapped up in about 8-10 hours. There are a number of islands to explore, ones that house towns & NPCs while others are just home to a number of nasty beasts for you to destroy. 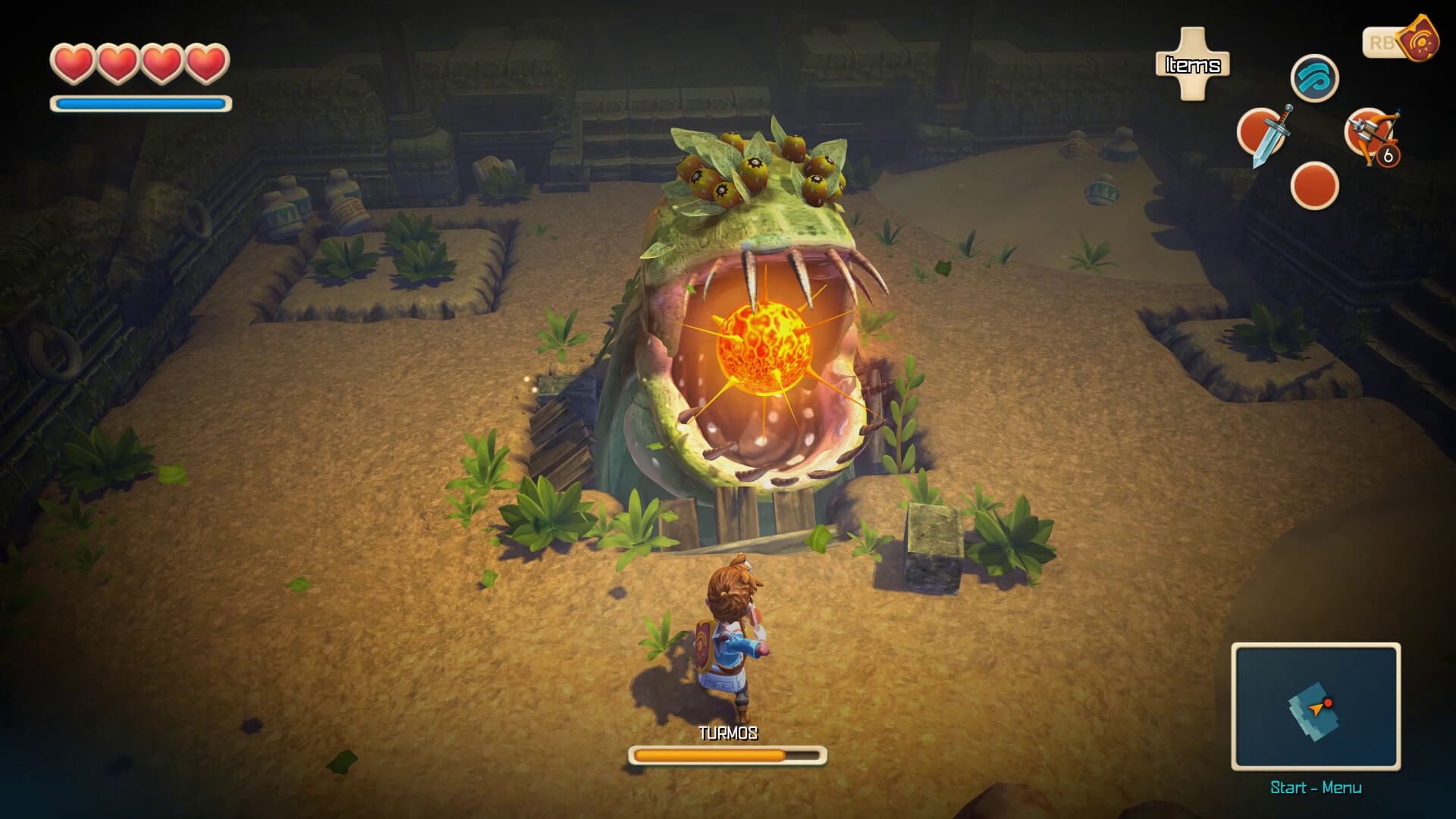 There you can collect coins for spending in shops, open treasure chests, find heart pieces (find 4 to gain an extra piece of life) & uncover secrets. Early on, exploration on some islands is limited & you’ll find you have to return later when you’ve got a specific upgrade (such as a pair of boots that allow you jump over small gaps).

It’s not a taxing game but there are times where it’s not clear just where you need to go next. Dungeons tend have a few puzzles to try & trip you up but they mostly relate to pushing blocks, hitting switches or blowing up walls (once you get bombs). There really isn’t much variety in the puzzles. 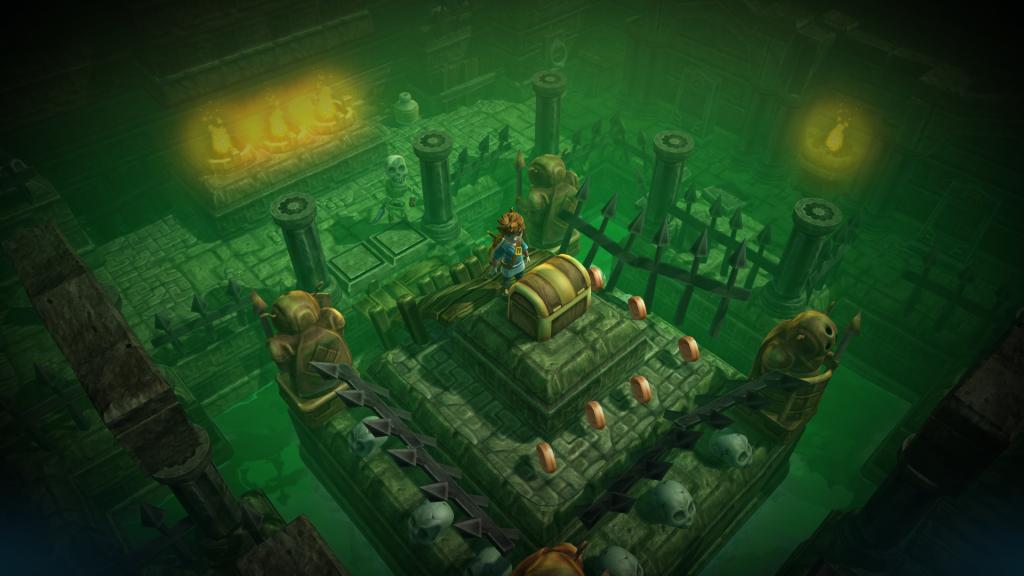 There are a few different enemy types that require different approaches with experience gained once they have been defeated. Experience leads to levelling up, with each new level giving some form of upgrade. It’s simple stuff really, reach a new level, the game will prompt you to push the button & you’ll get some text describing what you’ve gained. No stat building or balancing needed here; the game does it for you.

Travelling between islands is done via a boat. From an overview screen an island is selected & then the boat travels there with no control via the player. This is disappointing as all you can do is shoot a gun to destroy any obstacles that might get in your path. The lack of variety in this ensures that after a few trips you’ll be bored shooting pellet spitting octopuses & mines. Thankfully it’s rarely a long journey.

The islands differ in size & complexity but a mini-map in the corner helps keep you on track. The controls could do with a bit of tweaking as movement feels a bit stiff & the sword swing comes up way short. That really takes some getting used to & will see some early damage taken regularly.

Where the game really excels is with its musical score, created by some fairly large names within the business (Kalle Ylitalo, Kenji Ito, Nobuo Uematsu). It’s relaxing & uplifting during exploration while urgent & oppressive during conflicts. Its memorable stuff that really helps drive Oceanhorn’s story along. 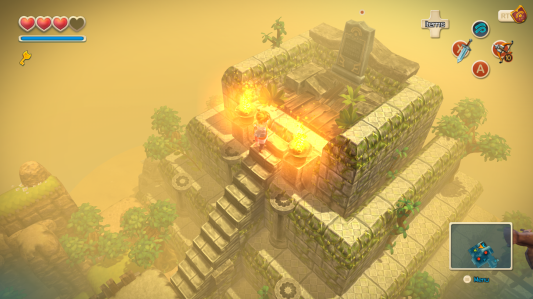 Oceanhorn: Monster of Uncharted Seas has its flaws & it is a pretty blatant rip-off of the Legend of Zelda series but it is a game that is well worth playing. Its gameplay is rewarding, the story is interesting, its boss battles are fun, it looks lovely, it has some great voice acting & even better music.

Hopefully the sequel (Oceanhorn 2: Knights of the Lost Realms) can improve on the small issues here such as the controls & on the rails sailing.

We here at GBHBL would like to thank FDG Entertainment for providing us with a copy for review purposes. Oceanhorn is available to buy on iOS, Microsoft Windows, OS X, PlayStation 4, and Xbox One.