Released way back in 2001 on Microsoft Windows, Max Payne is a third-person shooter developed by Remedy Entertainment and published by Gathering of Developers. It’s a game and a series that is well loved for good reason.

It’s been ported to most major systems so there is no excuse to not have played it but one of the oddest choices for a port was to mobile. How would such an intuitive and reflex based game work on mobile phones? The answer is pretty well!

Before we get into the mobile side of things lets talk about the story.

Max Payne is a NYPD Detective whose family was brutally murdered years before the game begins. Max is now obsessed with finding out who was responsible and getting his revenge.

Three years after his family’s death, Max has been working undercover inside the Punchinello Mafia family who are responsible for the trafficking of the drug, Valkyr. Max is called in to meet his handler at a subway station but things go wrong. His cover is blown and his handler is killed making Max the suspect.

With the both the police and mafia after him, Max is forced to go on the run.

Max Payne’s story is truly excellent. A wild ride of drug-fuelled madness that grips from the moment Max discovers the corpses of his family to the final shot of him standing atop a building in New York. The narration is done by Max himself and the voice acting is top-notch. It helps sell the gritty neo-noir style of the game.

The visuals have never looked this good. The mobile port has sharpened almost everything up so nicely that it’s easy to forget that this is a 17-year-old game! 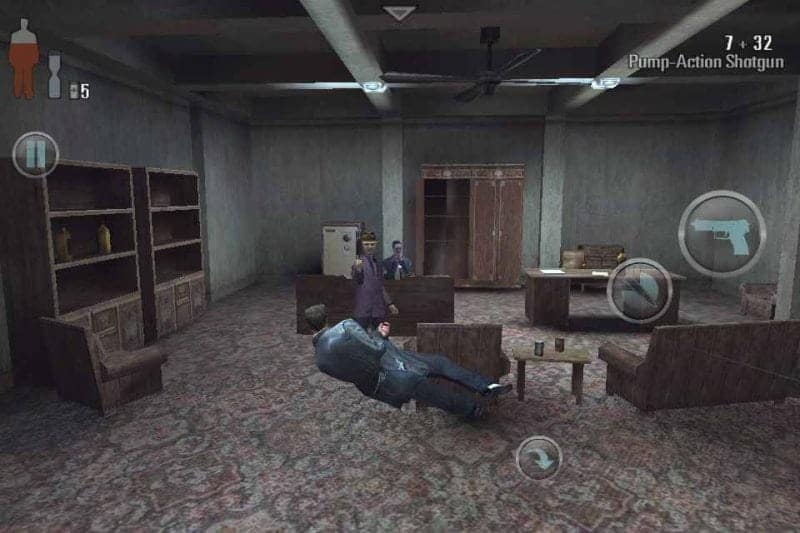 The biggest question most gamers will have going into this is how it controls. These types of games aren’t exactly well-known for being ported well control-wise. Thankfully Max Payne does better then most. The virtual joysticks on the screen have their issues but thanks to an auto-aim it’s a much more free-flowing and enjoyable experience. Every possible button is labelled clearly but not so much that it distracts from the action on the screen.

Bullet time is still as much fun as it was back in 2001 and you’ll be diving around every corner as if it’s the first time you’ve seen The Matrix. You can turn off auto-aim but it’s a lot less fun and a lot more frustrating.

The biggest flaw with the controls turns out to be the hit zones around the buttons. Meaning you’ll often press the wrong one at the wrong time. Across the 8-10-hour run-time of the game this might start to wear thin.

It’s worth sticking with it though especially if this is your first time playing the game. It’s aged way better then many other games from the same era and still massively satisfies.