You have to admire the effort that went into making Friday the 13th such an authentic experience. One with bags of charm, that’s load of fun to play & can be genuinely terrifying. Unfortunately the experience is marred by numerous bugs, issues with match-making & a lack of content. Priced around the £15-£20 mark & it would be a recommendation for everyone. Unfortunately at its current price of £31.99 there is no way it is worth the money.

A multi-player only experience as of right now (a free single player campaign is promised in the future). Friday the 13th puts you in the shoes of either a camp counsellor trying to escape/hide from Jason or the shoes of the masked murder as he butchers his way through the kids.

Who plays as who is random with 1 player chosen to be Jason & the rest chosen to be the camp counsellors. A short cut scene shows the arrival of the killer which highlights the first problem with the game. This cut scene is the same every single time with the only difference being which version of Jason arrives. It’s also unintentionally hilarious thanks to some choppy graphics & bad facial animation.

Once the cut scene ends (it is mercifully short, thankfully) the player will see just which character they are. Jason spawns on a small island away from the counsellors which gives the players who are in those roles time to get moving. As a counsellor you have a number of options available to you:

You can also radio for series hero ‘Tommy Jarvis’ to come & help. His role is picked up by a player who has already been killed. Thus the rest of the team that extra boost. 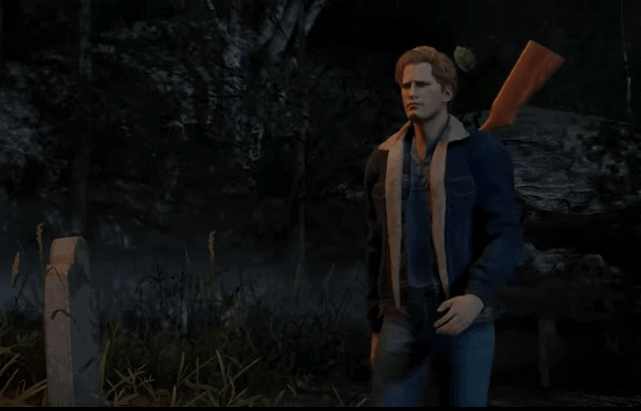 The maps are very big with plenty of houses & cabins to barricade yourself in. Players can also equip weapons & find items in drawers. Searching every house or cabin is key to finding the tools needed to repair the car or fix the phone line. Of course if your method of play style is to try & wait out the 20 minute game time by hiding, that option is also available. You can hide in cupboards, under beds, in tents etc.

Be warned though, if Jason finds you hiding he can instantly kill you with no way to fight back.

Players can not kill Jason (well, it is possible but takes a huge multi-player team effort) but they can halt his progress & stun him. Manage to attack him with a weapon & he will be disorientated & frozen to the spot for a short period giving you time to escape. If you’ve picked up a defensive knife & are grabbed by the killer the character will automatically stab him in the neck allowing you to escape his grasp!

You can distract him by using fire crackers, turning on music players & more but you’ll have to keep quiet yourself. Lasting the full 20 minutes is no easy task & most games end with Jason having killed everyone.

When you do play as Jason his skills & abilities are well balanced but need a few tweaks here & there. As the game goes on, he becomes stronger & more abilities are unlocked. Enhanced hearing, enhanced vision, the ability to teleport around the map & one that sees him enter first person mode & move very fast (like the demon in the woods from The Evil Dead). While all of these abilities drain, the speed at which they become available again could use a little bit of balance work. Skilled players will have few issues getting around the map quickly.

Where Jason has flaws though is with his speed, he is slow & simply chasing after a player is not going to be enough. Although the player’s stamina bar runs out far too quickly resulting in them being very easy prey in a chase. If barricaded out of a house, Jason has to smash his way through. This can take a fair amount of time giving players the chance to escape out a back window.

It’s surprisingly balanced in most areas & careful players (keep quiet, sneak around, find items) will be able to survive for long periods.

Unfortunately there is one glaring issue & that is Jason’s grab attack. Pretty much the go-to attack for most players. He reaches out & grabs the counsellor by the throat. Now if you have a defensive knife as a counsellor it will be automatically used here. However, if you don’t you have to tap A to escape. The problem is that this bar goes up so slowly that it’s pointless. Jason will always kill you unless the player playing as him takes his time (very rare). Not only that but the game will often glitch out with Jason able to grab the player from some distance.

It can be frustrating to be grabbed when he really wasn’t in a position to actually reach you. To make matters worse if you do manage to escape his grasp the camera will wildly swing around for a second or two completely disorientating you & giving Jason a chance to recover. That needs to be fixed.

Friday the 13th’s glitches can be very frustrating & hilarious at the same time. Closed doors sometimes don’t work, characters can run through objects while others that shouldn’t impede your progress, do. Both Jason & the counsellors will randomly flicker, lag & just generally become difficult to control.

As annoying as all of these issues are, they’re not going to ruin the fun that can be found when playing. No, what ruins the fun is the match-making. One of the most frustrating elements that will see many players just give up playing completely. Finding full games is one of the most difficult things about Friday the 13th & out of around 30 games played I’ve only been in a handful. Many times you’ll be dumped in an empty lobby having to back out & try again.

Should you manage to actually get a game going you can expect the game to end suddenly thanks to server problems. These issues are a serious problem for a game that costs this much & really doesn’t offer enough content (3 maps).

Friday the 13th could be a great game…eventually. It’s going to need a lot of patches so if you’re thinking of picking it up…wait. Still, it’s a crazy amount of fun to play!