“Nine months ago, Joker was cremated. I pressed the button and burnt the evil bastard myself. And then, we waited. Gotham braced itself for the inevitable power struggle. But it didn’t come. Crime actually fell. Deep down, I knew war was coming. I was just waiting for someone to pull the trigger.”

Batman: Arkham Knight is a 2015 action-adventure video game developed by Rocksteady Studios and published by Warner Bros. Interactive Entertainment for PlayStation 4, Xbox One, and Microsoft Windows. Based on the DC Comics superhero Batman, it is the successor to the 2013 video game Batman: Arkham Origins, and the fourth main installment in the Batman: Arkham series.

Set one year after the events of 2011’s Batman: Arkham City, the game’s main storyline follows Batman as he confronts Scarecrow, who has launched an attack on Gotham City, causing a city-wide evacuation. Scarecrow, with the help of the mysterious Arkham Knight, is also able to unite Batman’s greatest foes in an attempt to finally destroy Batman.

Gameplay is similar to previous Arkham games with several major improvements, such as an increase of depth and height in your surroundings. The player can fly Batman throughout the city using his cape, with gliding now allowing for faster, longer sustained flights, steeper dives, and higher climbs – which is where the added depth to the city comes into play. Arkham Knight’s Gotham City is five times bigger than in Arkham City and it’s really a sight to see. I recommend playing this game on as big of a screen as possible to really take in the vastness of the city.

Many of the gadgets return including the grapnel gun, line launcher, batarangs, the countering system, Detective Vision and the Remote Hacking Device.  The Disruptor receives an upgrade, becoming a rifle that can be used to disable or detonate enemy weapons and drone turrets, booby-trap weapon crates to shock enemies who attempt to arm themselves, and tag vehicles for Batman to track. New gadgets include the Voice Synthesiser, which can be used to imitate other characters’ voices such as Harley Quinn and the Arkham Knight to direct thugs into traps.

The combat is similar to previous games but definitely improved upon, it’s much more fluid and responsive. During relevant areas you’re also able to switch between yourself and a partner (such as Nightwing, Robin, Catwoman) seamlessly and use a double-team takedown to assist in beating your foes.

Basic enemies include enemies armed with shields and shock batons, while others are armed with guns which significantly damage Batman. These enemies can perform a charge and tackle attack only used by larger enemies in previous games; precision timed dodging, and a batarang can instantly defeat some charging enemies.

Arkham Knight introduces enemy medics who can shield enemies in electrified fields and revive unconscious ones, sword-wielding enemies, and brutes who are resistant to damage and must be stunned before they can be attacked; brutes wielding Gatling guns, tasers, and blades require additional steps to defeat. Enemies are capable of employing tactics to counter Batman’s various skills, including deploying landmines, controlling hovering drones, disabling vents if Batman is found using them, and detecting his location if Batman uses Detective Vision for too long.

Additionally a favourite move of mine was introduced which is the Fear Takedown where Batman can take out up to 5 enemies at a time (if undetected), with time slowed down so you can target one after another. 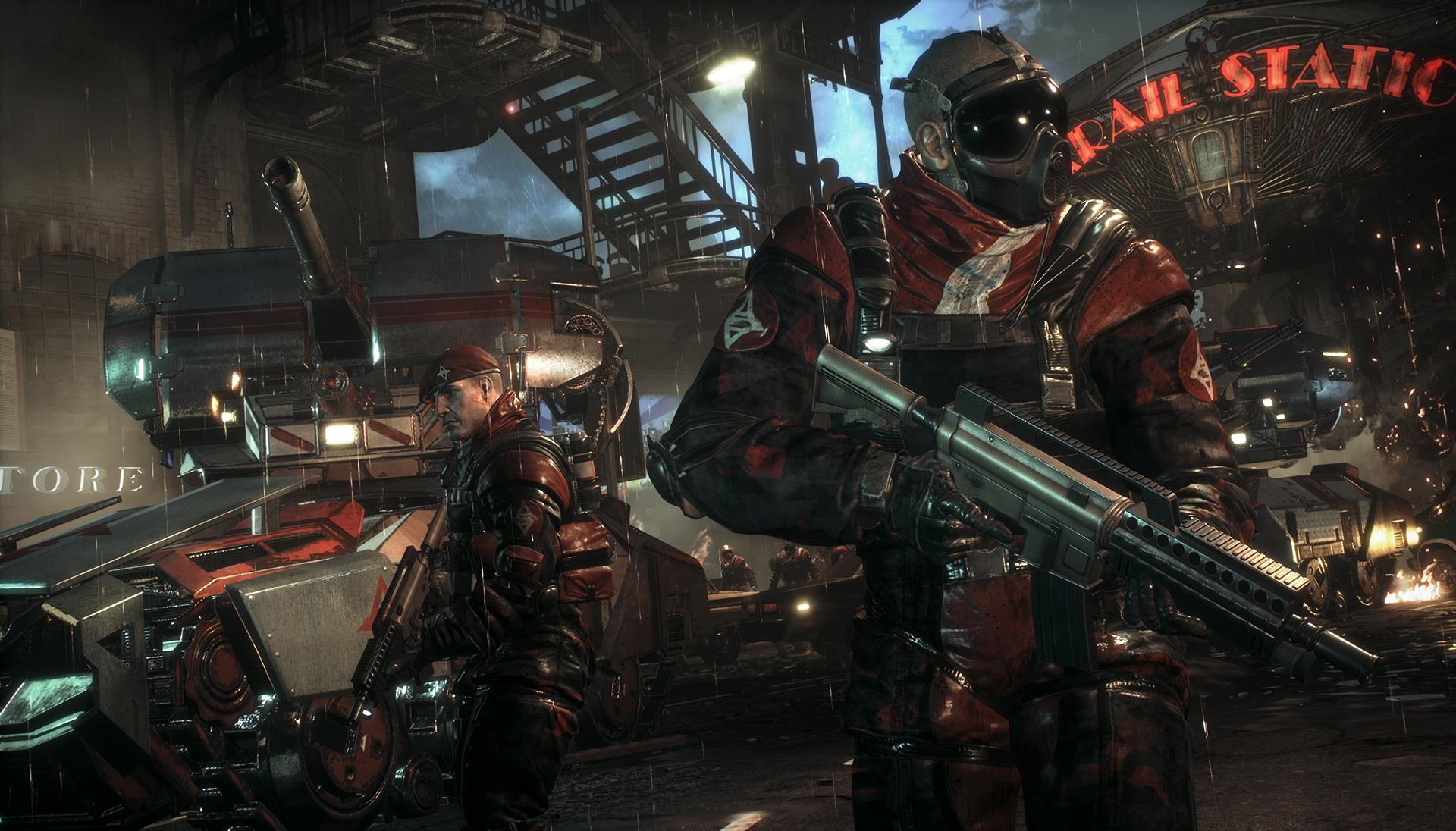 One of the biggest introductions was that of the Batmobile. The bulletproof Batmobile can be summoned to the player’s location while on foot or, if the player is airborne, summoned to meet Batman as he lands. The vehicle features the ability to perform jumps, speeds boosts, and rotates on the spot. Additionally it can smash through objects like barricades and trees, and fire missiles that can immobilize enemy vehicles. Batman can eject from the Batmobile and immediately begin gliding around Gotham City.

The Batmobile has two modes, which can be switched at any time: Pursuit and Battle. Pursuit is for moving from area to area and completing specific driving challenges. In Battle mode, the Batmobile becomes more tank than car, allowing a full 360-degree range of movement, including strafing in any direction, while revealing the multiple weapon systems on board. 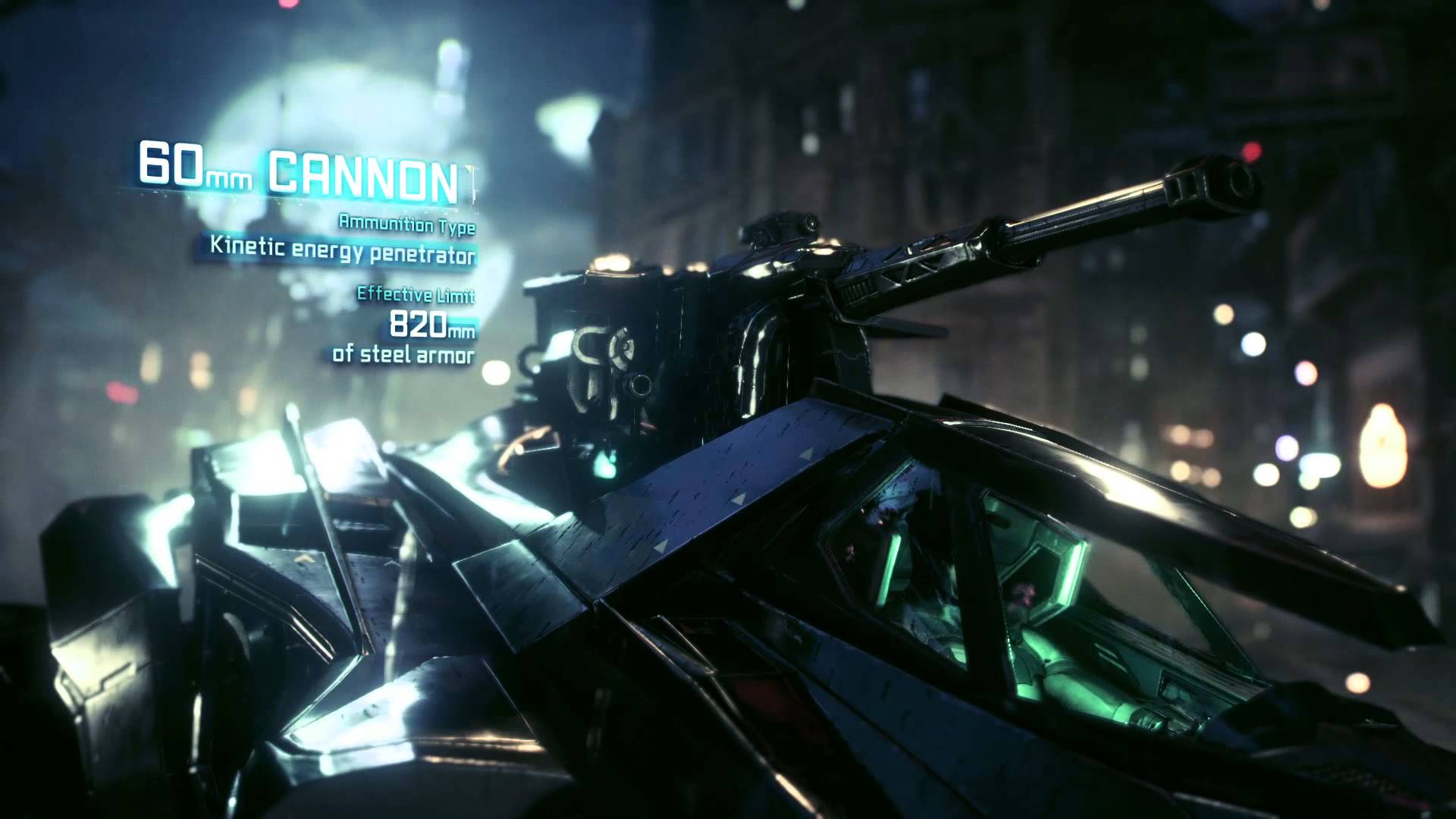 Overall, I had a lot of fun playing this game, as I said it’s really a sight to see and there’s so much to do throughout the city. My favourite parts were using the Batmobile’s battlemode to take down enemy drones, boosting high above Gotham’s skyline to travel across the city quickly, and watching GCPD slowly fill with criminals that I’d personally taken down.

I’d 100% recommend playing this game, I’ve missed out a ton of aspects of the game because there’s a great deal to Arkham Knight. This game looks amazing, the gameplay is fantastic and the story is engrossing and enjoyable.