I mean it’s not great but its fun for a certain age (hint – not mine) & is peppered with adult only jokes so parents can nudge each other knowingly while plotting their revenge on the cinema company for charging them a small fortune for the popcorn & drinks.

A lot of these references are randomly & pointlessly placed such as a Shining reference. Seriously? What the hell is that about? 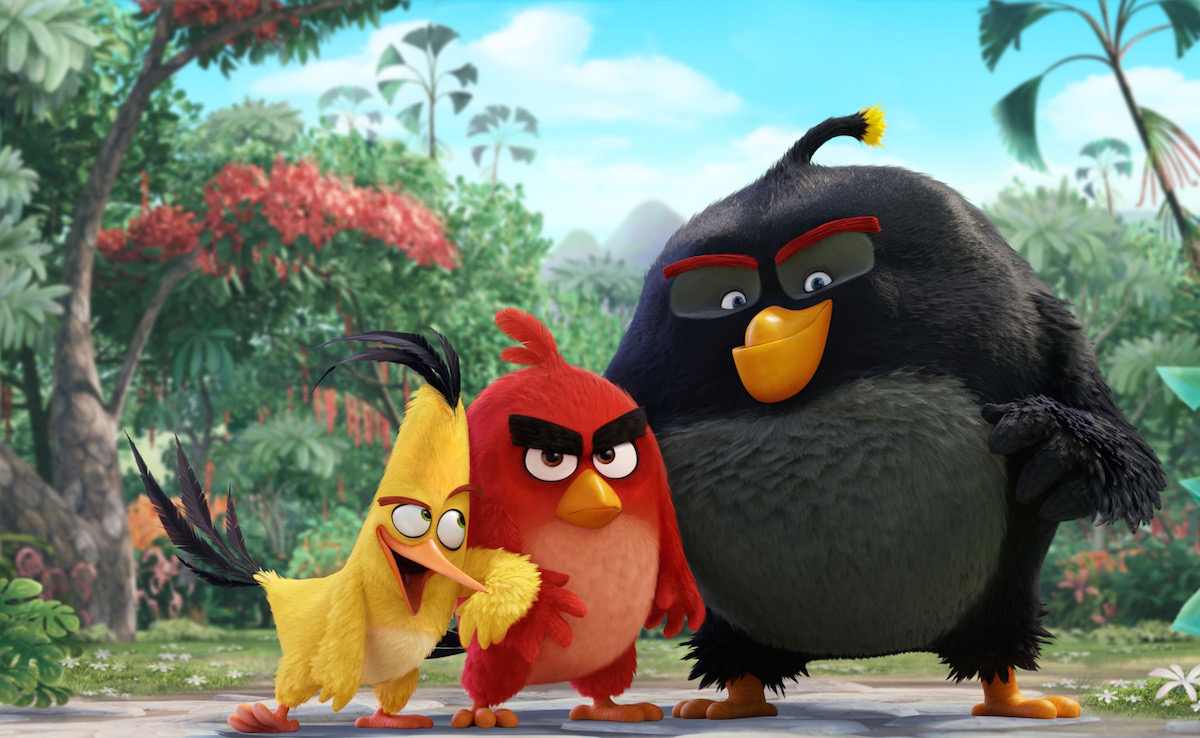 An animated comedy with a voice cast of stars that include Josh Gad, Sean Penn, Danny McBride and… *sigh* Peter Dinklage. Look, I haven’t quite forgiven him for his terrible role in Pixels. I’ll get there but it’s going to take time.

On Bird Island, where flightless birds live, Red is sent to anger management class to help with his explosions of rage. Red is a recluse, shunned by most of the town but that suits him nicely. There Red meets a group who are also dealing with their own issues…in particular, Chuck & Bomb. You’ll notice that each of these birds are the main birds in the Angry Birds game. 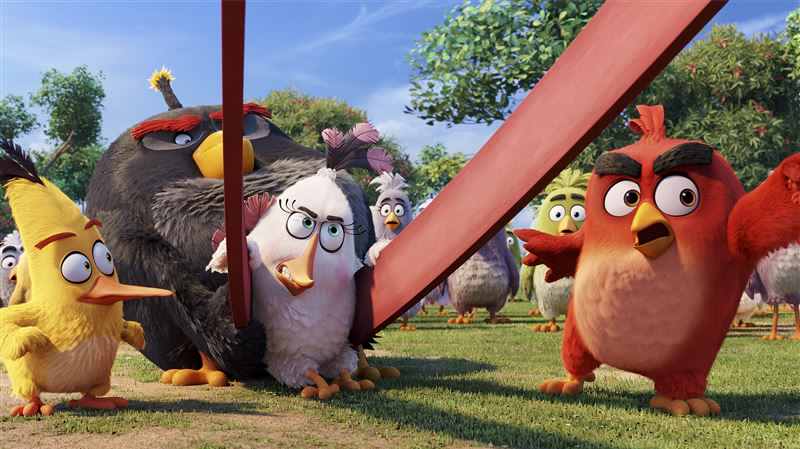 Anyway much comedy ensues as Red struggles to take part in the class, plenty of silly/toilet humour but the occasional good joke that even got me chuckling along. A lot of that is because of the great voice acting…everyone does great here!

One day a boat arrives at Bird Island with pigs that have come from Piggy Island. They claim to just be travelling & come in peace so they are welcomed on the island. Red is suspicious though as his questions keep uncovering lie after lie from the pigs, in particular their leader, Leonard. 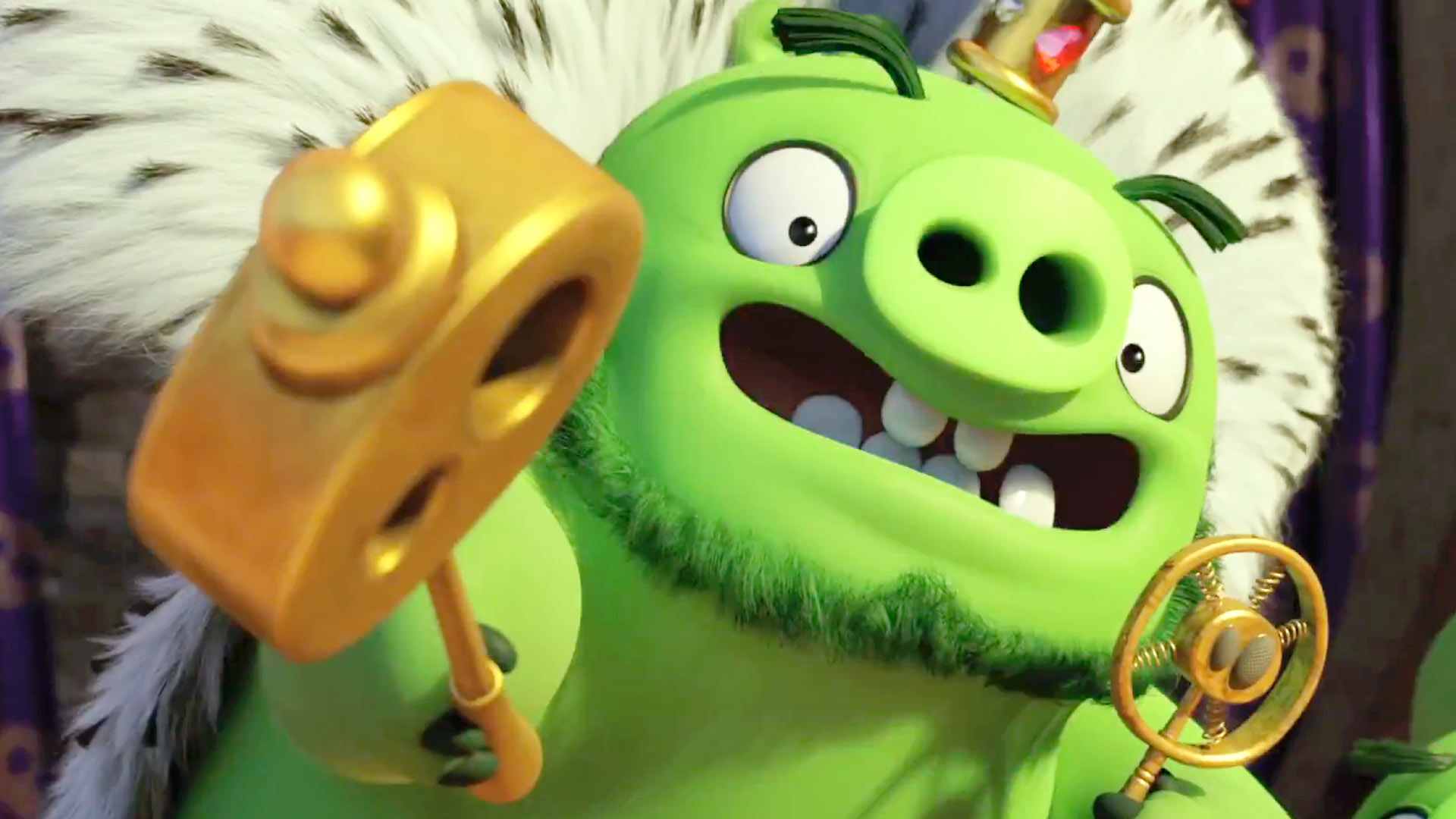 No-one believes Red though so he goes looking for his hero, the Mighty Eagle, the only bird on the island who can fly. They find him but he’s kind of gone off the deep end & it’s while all of this is happening that the pig’s set their plans in motion. They blow up parts of the island & steal the bird’s eggs, Red & his friends try to stop them but they sail away back to Piggy Island.

The birds don’t know what to do so turn to Red for guidance, suddenly everyone needs him so he tells them to let their anger out & use it against the pigs. They build a boat & sail to Piggy Island; there they attack the pig city using a slingshot to launch themselves at the buildings.

The pigs, which were going to eat the eggs in a few days, realise that they are under attack so move their meal forward, to lunchtime! Will Red & the rest of the birds be able to stop the pigs in time?

Well seeing as this is an animated film aimed at children, you know the ending from the moment the film starts. That’s not an issue, nor is the base story that has been done to death by now (outsider saves the day & is accepted at the end). It’s a simple tale but it’s done quite well here & I was impressed with how they tied the game into the story, it feels natural.

What doesn’t feel so natural though is the sequel bait ending & the lame musical number (this has become a trademark of big animated movies but its rarely enjoyable). In fact the soundtrack for Angry Birds had me raising my eyebrows on several occasions. Actual songs like Paranoid by Black Sabbath, Behind Blue Eyes by Limp Bizkit and many more, They so odd & out of place with the animation, it also screams of laziness as if they couldn’t be bothered to compose a piece of good music to match the moment. How am I supposed to feel sympathy for Red if I have to listen to Fred Durst droning on in a song that was universally panned? It’s neither clever nor a wink to the adults of the audience, it’s just shit.

I know these big budgets, Hollywood animations feel they have to stick in jokes & references that only adults will get but I wish they’d understand that they need to be at least smart jokes. Randomly having a bird open a door & see two pigs dressed up as the girls from the Shining isn’t clever, it’s stupid as is Red almost swearing on several occasional but changing it so it’s more ‘bird’ related, think; flocker & the like. Really smart writing there eh?

Still The Angry Birds movie surprised me by being entertaining & a bit funny at times. Kids will love it (if they don’t get bored sitting through the near 100 minute movie) & so will plenty of adults. Me? I thought it was alright. 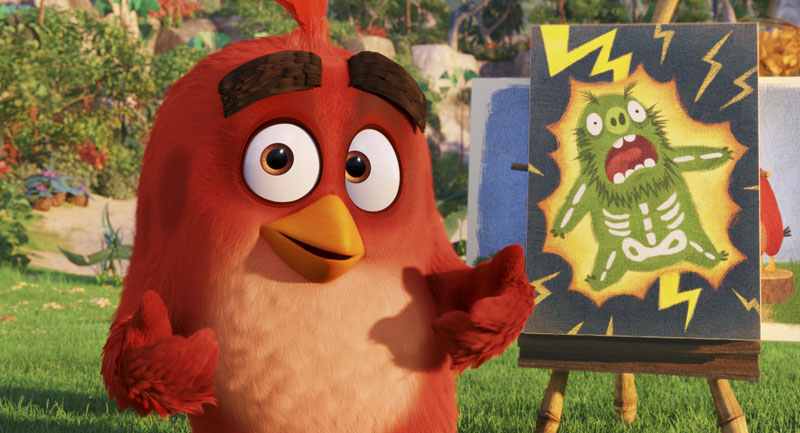