The 4th movie in the already too long Resident Evil franchise begins a year afterwards the last with the clone army of Alice’s attacking the Umbrella facility underneath Tokyo. At this stage in the movie I’ve had my fill of Alice already.

The clone army wipe out the facility but Wesker escapes on a plane activating a bomb that destroys the facility & kills every clone. Convenient!

On the plane Wesker comes up against the real Alice who had waited there for him but he gets the upper hand injecting her with an anti-virus that takes her powers away. The plane then crashes & Alice somehow survives….Wesker is presumed dead.

Much time later, Alice is traveling by plane to Arcadia in Alaska. The place the other survivors at the end of Extinction went. On the way she discovers the helicopter & is attacked by Claire Redfield who appears to be under the control of some sort of metallic spider on her chest. Alice gets it off but Claire is suffering from amnesia & doesn’t recognise Alice.

Together they travel to L.A (what is left of it) & land on top of a prison that is surrounded by the infected. Inside are survivors that reveal that Arcadia is a ship travelling along the coast but has stopped moving recently. With the prison surrounded there is no safe way to reach the ship but a mysterious inmate locked away has a way out. 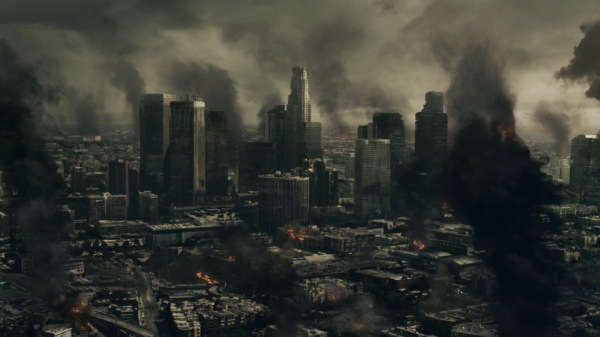 That inmate is Chris Redfield who is in prison for…who knows why? He seems to think it was a prank by other inmates. His escape route…go down tunnels created by Majini zombies. Nice idea Chris…

So Afterlife introduces the version of zombies/infected from Resident Evil 4 & 5. Reasons are never explained & our group don’t seem to treat them any differently.

Throw in the giant axe-man from Resident Evil 5 & it is easy to see how the movies have developed alongside the games…kind of. I mean for the first time in the film series Chris Redfield turns up & he is just awful, I mean awful. I wanted him to get killed within 5 minutes & his only real role is to be moody & confused as to why his sister Claire doesn’t know him.

So ask any person who has seen Afterlife what they remember about it & they will likely say 2 things. The slow-motion shower fight scene & the final battle against Wesker. Both are frustratingly slow & filled with stupid moments that are designed for the 3D audience. I didn’t watch it in 3D & I really didn’t miss much. An axe swinging round, Wesker’s glasses thrown towards the screen & bullets…the usual fare that does nothing to improve the movie.

The shower scene in particular is something I hated…its all style & nothing else as Claire & Alice face off against the axe-man in slow-motion. Seriously…it doesn’t stop; the fight probably lasts about 30 seconds but is dragged out for 5 minutes. Alice devoid of powers is still able to kick ass with the best of them but is now backed up by an equally able Claire. There is no believable threat from the axe-man as the girls effortlessly duck his giant axe swings & bounce off walls with ease. It’s laughable…

The Wesker fight should have been built up better…it is as simple as that. This is his first movie where he really gets to shine & his perceived threat is dampened by the knowledge that Alice is unbeatable. Seriously…Wesker is all T-virused up yet he still can’t beat a human Alice!

Now as a player of the games this Wesker is pretty true to the version we see in Resident Evil 5 & props have to be given to the actor portraying him but with little backstory given to him, non-game players must have been pretty confused about his role. It’s strange as these movies were originally never made for fans of the game series but seem to be transitioning back towards them now. Just who is Resident Evil made for?

Visually Afterlife is very easy on the eyes (as is Milla’s cat suit) with plenty of action but little else to enjoy. The acting is fine throughout except for Chris who is awful but the movie is suffering form Alice overkill. No-one gets a chance to develop as Alice takes up most of the screen time. A final credit scene does little to inspire the next movie in the franchise either.