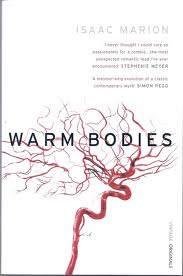 Warm Bodies is described as a love story between a zombie and his prey.

I’m sure many people will have read that description and dismissed the story completely. A freakin’ zombie love story? What is this? Zombie Twilight?

I don’t blame people for having that reaction. It doesn’t help that the movie based on this book removed so many important elements that made it so endearing. Warm Bodies the movie is Zombie Twilight, the book is much more.

Before I tell you why you need to read this book I just want to explain just why I love it.

Zombies are dead, I mean the genre has no life in it. There are so few original ideas that it is near impossible to get excited by any new release be it in film, book, comic or any form of media. Warm Bodies is an original idea, one that may not be for everyone but one that had the balls to try something new.

R is dead, he doesn’t know for how long as time has no meaning to a zombie. He just knows he is & so is the world. He is lucky, having died with relatively no damage he could almost pass for a human if it wasn’t for the dark circles around his eyes & the hunger for flesh. R hates that side of him & wishes there was more to undead life but he is lucky as he is one of the few who have retained some semblance of brain function.

Another is M, his friend who lives with him and thousands more of the undead at an airport. The dead gather together because they feel safer in groups even if they don’t understand why. There is no living there, they stagger around, fall down and stare blankly at each other. Those who have retained vocal cords attempt to communicate with each other (it’s not much, believe me) but it’s pointless. Undead life is pointless, the only thing that breaks it up are the hunts.

Eating brains briefly makes a zombie feel alive (a nice Return of the Living Dead reference) as they experience the victim’s memories. It’s during a hunt that everything changes for R. They attack a group of survivors & R eats the brain of a boy. This boy is Perry & his life flashes through R’s dead brain lighting it up & leaving one residual memory…Julie.

Julie is Perry’s girlfriend & she is among the group. In an instant R knows he has to save the frightened girl. He manages to communicate to Julie that he won’t bite her before smearing her with undead blood masking the human smell to the rest of the zombies. He then leads a catatonic Julie back to the airport & a grounded plane that he uses for privacy.

So begins one of the most fascinating relationships between zombie and human. Julie can’t understand why R is keeping her alive & with his limited vocal ability he struggles to explain but the pair begin to learn more and more about each other.

The more time R spends with Julie, the more he begins to change. What if the zombie virus that made R could be changed? What if the end of the world could not just be stopped but put in reverse? Both Julie & R begin to realise that his change is the key.

There are only two problems though:

On one side there are the ‘bonies’, the leaders of the zombie race who are all but bone after their flesh has withered away. They fear & despise the change in R & will do everything to keep the status quo.

On the other, the humans that will have to change how they’ve seen zombies for so long. No longer fearing them but helping them embrace the changes that R & Julie have begun.

Warm Bodies is one of the finest pieces of zombie fiction I’ve read in many years & I can’t stress enough that this way more than just a ‘zombie love’ story. In fact, it is more about the reversing of the zombie virus through passion and a desperate need to feel alive.

The supporting cast are stunningly written too, a mix of hope & hopelessness on both sides. As human it’s impossible to not feel pride for those that can see the change in the zombies & want it to work but it’s equally easy to understand those that can’t see anything but flesh eaters.

The book finishes with just enough hope, just enough to make you believe that things might be OK in the end. It’s going to take a huge amount of work but it might just be possible.

Don’t dismiss this book, you won’t regret it. Oh & don’t see the movie.