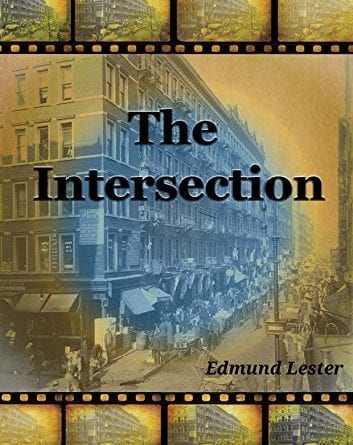 The Intersection by Edmund Lester is a surreal and dark novella that chills with its exceptionally well told story.

The star of the book is Ben Williamson, a mundane and ordinary English man who works as an accountant and is approaching his fiftieth birthday. His life is uneventful, his marriage to Gilly is unexciting but Ben likes it this way. He is the epitome of middle-class England and many a reader might find him quite familiar.

Things are about to change for Ben Williamson though when he is caught in a downpour while on holiday in Italy. He jumps into an old antique shop to avoid the rain and while in there comes across an old film canister. A film canister with the title ‘L’Intersezione, New York’ on it. Ben is drawn to the film and can’t stop himself from buying it.

Once back home, Ben finds a way to view the short film and is immediately captivated by a scene of a New York intersection in 1909. He slowly becomes obsessed with the film as the images of a life he has never seen before haunts his dreams. It begins to affect his working life, marriage and mental state as he obsesses over where it is but what Ben doesn’t know is that the intersection has secrets…dark secrets.

What an excellent story this is. The best stories are the ones that draw you in and have you share in the characters feelings. Here, it is impossible to not have the same obsession that Ben does over the film. At first it seems as though it’s his boring life that draws him to the intersection but as the book plays out, you start to get this sinking feeling that there is something bigger going on here. Something that he has no control over and we, as readers have no choice but to be part of.

It’s almost with a sense of dread that each page is turned as Ben takes a blind step closer to his destiny. You want to scream at him that this will not end well but as he detaches himself from reality, you might find yourself detaching from Ben as a character. So much so that when the book reaches it’s gripping finale all you can say is “we told you so Ben”.