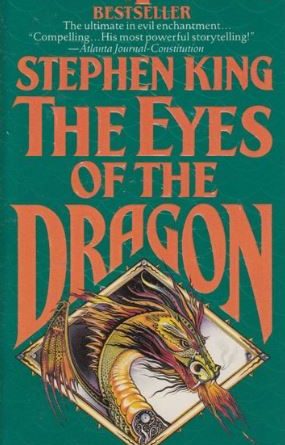 The Eyes of the Dragon is a fantasy novel by American writer Stephen King, first published as a Limited Edition by Philtrum Press in 1984 and illustrated by Kenneth R. Linkhauser.

The novel would later be published for the mass market by Viking in 1987, with illustrations by David Palladini. At the time of publication, it was a deviation from the norm for King, who was best known for his horror fiction. The book is a work of epic fantasy in a sort of medieval setting. It is a story of the age old battle between good and evil with magic playing a lead role. Despite it’s diversion from the Stephen King norm, The Eyes of the Dragon was a popular book that sold very well. 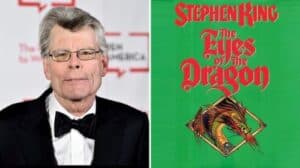 From my perspective, I always saw this story as a kind of off shoot background story to Stephen King’s masterpiece series, The Dark Tower. It is situated within locations in that world and features many characters and plot points known through tales told in The Dark Tower series. Anyone who knows me knows of my undying love of The Dark Tower series and of Stephen King. I have read nearly every book King has ever released and often, partly, to hunt for Dark Tower connections. The Eyes of the Dragon is the Dark Tower jackpot.

The Eyes of the Dragon takes place within the realm of Delain. Delain is a well known location in The Dark Tower universe, being located within In-World, mentioned regularly in the series and in The Little Sisters of Eluria.  It is told from the perspective of an unnamed narrator. That narration is delivered casually and the narrator regularly adds his own commentary on what’s going on. It makes for an interesting additional perspective. Basically, the story tells of King Roland (not that Roland) and his devilish magician, Flagg (yes, that one). Flagg is not a fan of Delain and his end game is to see the kingdom fall. King Roland’s wife, Queen Sasha is Flagg’s arch nemesis. Purely due to the fact that she has a good, pure heart and gives birth to a son called Peter.

It is believed that Peter will grow to be a strong and noble King, and that worries Flagg. It is a threat to his position and he needs to deal with it. When Sasha falls pregnant with a second son, Flagg forces the midwife to harm Sasha during the labour resulting in her death though the second son, Thomas, is born. With King Roland in emotional tatters, Flagg starts his campaign to destroy Peter. He wants Thomas on the crown, believing him to be less noble and more malleable. Flagg finds a way to frame Peter for the poisoning of King Roland. A deed committed by himself but, unknown to Flagg, witnessed by Thomas.

Thomas does not speak out though and Peter is found guilty and locked in a large tower called the Needle for the rest of his days. Thomas, just a young boy, is crowned King and Flagg starts to take control, moulding Thomas to his will and starting his campaign to destroy Delain. As time passes, Flagg’s demonic ways and being is outed at around the same time as Peter finds a way to escape his prison. Thomas, finally a little older, comes forward and tells the truth about who he saw poison his father and the hunt begins. Flagg flees, Thomas, feeling shamed, dedicates his life to bringing him to justice and Peter starts the task of rebuilding Delain to it’s former glory.

I guess it isn’t much of  a spoiler to mention here that Flagg is never brought to justice, even though the book stops before telling us either way. We King and Dark Tower fans know that Flagg has many more appearances and pivotal moments in the future. 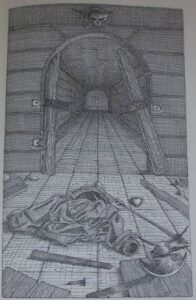 The Eyes of the Dragon requires an open mind to read it. It isn’t easy, purely because it is most likely you will have preconceptions when you start it. It is a Stephen King book so instantly you think horror or science fiction or most likely a mix of both and you are not getting any of that here. I might be wrong, but I think I remember King stating he had written it for his children. I guess it could fall into a Young Adult category? Really it is a Medieval tale of Kings, Queens, future Kings and mischievous advisors. A story so like many, many others before it by other authors, past and present.

The fact that The Eyes of the Dragon is different to every King book released up to this point doesn’t mean it is a bad book though. It isn’t. The Eyes of the Dragon is very well written and I love the narrator comments. It flows well, it has an exciting story and does leave you guessing as to where it will end and whether Flagg will meet justice.

For me though, it isn’t really a story I love, but, it is so heavily connected to The Dark Tower, I couldn’t possibly not enjoy it. I guess I kind of read it from Flagg’s side of the fence. It was his story. I cared for Peter, he is a great character, but I really only wanted to hear a tale of what Flagg had been up to so many years before The Dark Tower cycle started. For this reasons, I loved it.

So, a hard book to categorise really. Well written, strong characters but a child friendly tale that drops all horror elements completely. And then there is the large Dark Tower connections that pull it back to being exciting and interesting. At the very least, the worst you could say about this book is that it is well written but not necessarily for you?

The Eyes of the Dragon by Stephen King