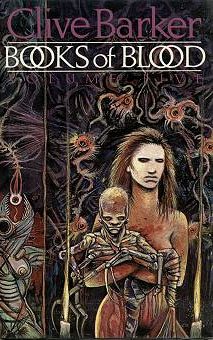 Volume 5 opens with one of Barkers best works, so good that it was turned into a full length movie that was simply sublime. The Forbidden is Candyman, a movie so good that it holds the high distinction of being one of the few 10/10 films on this site.

The short story does vary from the film but that is to be expected. What it does have is the same feeling of despair & hopelessness.

Helen is doing a thesis on urban graffiti & focuses on a run-down estate that would be considered abandoned if it wasn’t for the people living there. While exploring she discovers a huge piece of artwork adorning the inside of an abandoned flat that makes reference to someone or something called The Candyman.

Sweets for the Sweet…

As she talks with some of the residents she discovers that there have been numerous incidents & deaths that may be related to this ‘Candyman’. The locals aren’t exactly thrilled with her prying though & neither is the Candyman himself.

The Forbidden is an excellent story that is not diminished by having viewed the movie adaption, characters are alive & the Candyman imposes such threat that he almost leaps off the pages ready to slash your throat with his hook.

An unusual tale from Barker’s imagination sees Jerry hoping to gain finance from a shady businessman named Garvey so he can redevelop an old swimming pool building. While checking the building out with Jerry, Garvey catches sight of a nude teenage girl but she runs off. He comes back later & discovers the centre of the building has a full swimming pool that emits a strange glowing light.

He is disgusted to see that a group of nude teenage girls are nursing misshapen & grotesque creatures so he kills one. He is than attacked by the girls & knocked out.

Waking up he believes it’s all been part of a plan of Jerry’s so sets about getting his revenge. Jerry eventually encounters the small pool & discovers just what is in the water. After encountering the nude girls he has sex with one & heads home. The next day he discovers, much to his girlfriend’s disgust, that he has transformed into a woman.

The Madonna is a good story up until its disappointing ending as the mystery surrounding the pool & its inhabitants deepens. Neither Jerry nor Garvey is likable so it’s hard to care about what happens to either.

Far too many questions are raised at the end without a satisfying conclusion. While definitely a unique story from Barker, the lack of his usual glut of violence & descriptiveness harms it.

Nonsensical but utterly brilliant, Babel’s Children is a story about how major world conflicts & events are solved. A woman breaks down in the middle of nowhere & discovers a compound which house a group of the world’s greatest minds, albeit in bodies that have reached the finer stage of life. Together they are responsible for sorting out solutions to world affairs but they’ve been doing it for so long that they now just play games to decide the outcomes, such as racing frogs (‘that’s Israel, don’t step on him’).

The arrival of the woman gives a few of them the hope that they can escape with her to experience freedom just once more.

What a brilliant idea, Babel’s Children is. I loved the concept behind it, the world’s affairs decided by games of chance. The only thing stopping World War 3 is a group of elderly geniuses who’d much rather be doing anything but that.

Unfortunately characters suffer & few are fleshed out beyond a name, the story is quite short as there is only so much to tell but it’s a lot of fun. It’s also a real departure from the normally violent & gore heavy yarns Barker normally spins.

Now this is more like what I’ve come to expect from Barker, a tale filled with imagery that sticks in your mind, characters so real that you’ll feel their breath on your neck & violent deaths that will churn your stomach acids.

Set in a prison, Cleve is a petty criminal that has been inside a few times before. He knows how it works so is called upon by the warden to keep any eye on his new cell buddy, Tait.

Tait is a strange young man who asks a lot of questions about the history of the prison, stuff that sees him at loggerheads with other inmates. He eventually reveals to Cleve that he intentionally got himself sent to this prison as his grandfather was executed & buried within the grounds a long time before.

Tait believes his grandfather had powers, powers that Tait also has & that by contacting him he learn to control & utilise them. Tait’s attempts have an effect on Cleve who begins to dream of a huge city in the desert that houses horrific scenes of murder. He realises that it’s a form of purgatory for murders & that Tait’s grandfather is looking for a way out using the boy as the key.

I really enjoyed this tale & the imagery created really sticks in your mind. The city Barker describes is a wonderfully imaginative place filled with such sights that only he could come up with. It’s so real that you can feel the desert wind & the sand shifting under your feet.

Characters, Tait & Cleve are interesting & likable…enough that you want to see how it all turns out. It’s ending is very satisfying & rounds of what is one of the strongest & diverse volumes so far.