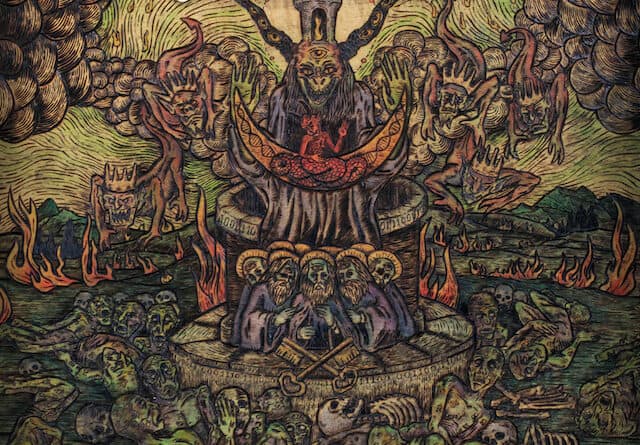 Dredged from the swamps of DeLand, Florida, long-running stoner metal/sludge outfit Junior Bruce is about to unleash their fourth studio recording via Sludgelord Records. The Pray for Death LP will be released on cassette and digital formats on October 30th, 2020.

It’s with a crusty and cranky fury that Junior Bruce announce their return, one that feels mammoth-sized as they kick into The Sleeper Awakens. A chugging set of riffs, a heavy assault of drums and bass that fills the mind with lead and that classic sludge vocal style where it sounds like a swamp being drained.

Faster at first but consistently heavier, Terror Mounts (Wretched Thing) best moment comes when it slows the tempo down to a filthy level. Junior Bruce pulling from the deepest and darkest corners of sludge to reveal a hellacious sound.

That’s the bar set but Junior Bruce are certainly not afraid of seeing if it can be topped. The persistence of the guitars on 7,000,000 Years (Ancient Astronaut) pays off. The Basement’s measured creep is like sinking slowly into a quagmire of ice-cold filth. Watch out for the nip of a guitar solo as it goes on too!

The brilliance of this album continues into Anti-God, a Junior Bruce that feels like they’re struggling to contain their wrath, and this is them letting the mask slide momentarily. Before one-nine-nine-nine changes the formula up a little with a more measured style of vocals that calls to the progressive style of the likes of Gojira. It is, once again, an absolute banger that encourages so much head-banging.

Reaching the end, it’s a return to a more hyperactive pace with The Mirror. A track that is all about its guitars and drumbeat. Before the aptly titled Unspeakable Horror ends things with a bang. One that leaves you dumbstruck and in awe of what was achieved here.