Bodom are back with a new album, and their first as a four piece after the departure of guitarist Roope Latvala leaving Alexi Laiho in charge of all guitar duties (yes, there was a second guitarist other than Alexi on previous albums). Released with Nuclear Blast on October the 2nd, they will be looking to grow even further after the relatively huge success of their last release, Halo of Blood.

For those who are unaware, Children of Bodom are a heavy metal band from Finland who formed in 1993 though they were then known as Inearthed. They signed for a new label in 1997 which brought with it the new name Children of Bodom, named after the unsolved murder of three teenagers at Lake Bodom. As Children of Bodom they have released 9 studio albums as well as multiple live albums, EP’s etc…. in their 18 year existence which is a pretty decent return for fans. There has been one change, mentioned above, in their line up since Halo of Blood with the departure of Roope Latvala leaving Alexi Laiho in sole charge of guitars and vocals, Jaska Raatikainen on drums and backing vocals, Hennka Seppala on bass and backing vocals and finally Janne Wirman on keyboards.

I Worship Chaos has 10 tracks on it in total though there is a special edition available which also has 3 bonus cover tracks on it. True to their nature, the covers are a little unusual and include a version of Kenny Loggins’ Danger Zone. This review will focus on the ten track release though which is just over 45 minutes long in total.

The first of these ten tracks is called I Hurt and it is played mostly at a mid tempo with a stomping riff. It still sounds very heavy and the vocals sound pretty strong. There are lots of little guitar lines and keyboards are quite prominent here which I guess will be something that happens a lot on this album due to losing a guitarist. A decent little solo which is mainly played on keys occurs near the end to make an okay start to the album. It doesn’t really ever hit any great heights but is okay as a song.

Track 2 is called My Bodom (I Am the Only One) and jumps straight into vocals without an intro. It is a typically thrashy affair with a slightly odd sounding riff due to the turned up end during the verses. The chorus is pretty catchy though and the guitar/keyboard combination works well throughout. An unnecessary stop before the solo adds a little confusion and the solo, while I am sure it is technical, it doesn’t have the glitz and glamour of Alexi’s usual playing. The song switches to an almost different song completely near the end but it is actually probably the best part of the song with thumping drums and bass and a great lead guitar and keyboard line playing over it all for a minute or so.

Morrigan is up next and starts with an eerie keyboard line over a very clever little riff that harks back to earlier Bodom days. Vocals sound particularly strong on this track and the little guitar moments that punctuate the verses are excellent. The chorus adds some very fast drumming to the layers already present and is really upbeat and infectious. There is a great guitar solo half way through as well which all adds up to a very good song. 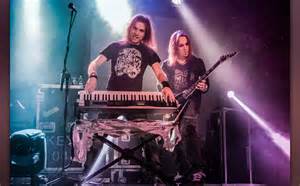 Horns is the 4th track and it is played at a blistering pace throughout. It is very much based in the thrash metal side of things and while I imagine it would be brutal in a mosh pit, it isn’t really anything too make you sit up and take notice. The vocals are generic, one line shouted at a time with no melodic variation and it is actually quite difficult to separate verse from chorus. It does have a clever sounding solo near the end though, as you would expect from such a talented guitarist.

Prayer for the Afflicted is track 5 and starts off with a slow organ like keyboard effect. When the guitar joins in at the same melodic pace, it seems to have a little battle with the keyboard which sounds great. It is one of those sombre, slower but heavy Bodom songs in the same vein as Dead Man’s Hands on You and it sounds really good. Vocals have a lot of power to them and the guitar blasts sound atmospheric, almost power metal in style. The solo near the end is pretty huge and the song continues through to the end of the track at the same slow, but heavy, pace with a few guitar and keyboard flurries as it fades.

The title track, I Worship Chaos, is next and starts with a riff being played very quickly on its own before the other instruments join in and continue the same riff. It is frightening how quick the band play this intro. The verses ease the pace off a little and the keyboard becomes more prominent. The chorus isn’t the catchiest though but there is a pretty cool section of music played after the second chorus that sounds like a full on stampede of raging drums and notes. Not bad, but again, not exactly inspirational stuff.

Track 7 is called Hold Your Tongue and starts off with a more mid tempo, rhythmic feel. This song has load going for it. Intermittent guitar solos, keyboards and guitars working in harmony together, strong sounding vocals and a constantly evolving tempo. There is a load of melody going on in this one as well and it all builds into my favourite guitar solo so far, although there is a moment in that solo where whatever effect is being used, makes it sound like an 8 bit computer rather than a guitar. That aside though, this is the best track on the album so far and by some margin.

Number 8 is called Suicide Bomber and sticks with the rhythmic pace, which I personally think works better for them anyway, during the intro. It does speed up as the vocals near and it is another fine example of keyboards and guitars working in harmony throughout each verse. The chorus is catchy and the song feels well put together and heavy. There are loads of switches in tone here as well as a fast guitar solo. Another good track.

The 9th track is called All for Nothing and is another of the slower, sombre Bodom songs. The initial vocals are actually whispered throughout the first verse with volume and intensity being increased for the brilliant choruses. The second verse keeps the slow tempo but lyrics are now being shouted and they keyboard sounds more like a grand piano in the background. The second half of the song sees a speed up led by the drums and bass for a period of time though it soon returns to the moody, sombre feel of the early stages. It ends with an absolutely fantastic mix of guitar solos and keyboard solos both playing off each other like dual guitars. Very impressive.

The final track on the album is called Widdershins and heads straight back to the thrashy, speed riffing we are often used to from these guys. Pretty generic verses are punctuated by impressive musical intersections of fast squealing guitars. As the song progresses there is an awesome little section of guitars and keyboards building an atmosphere together when with a sudden scream from the singer, it breaks down into the song again. The keyboard solo is pretty cool and backed up by a tidy little riff. With a little under 2 minutes left in the track, it breaks down into a slow chugging riff, similar to the end of Machine Head’s Davidian which, as it progresses, starts being interjected with little effects and solos. A good end.

For me, the album suffers from Alexi controlling all guitar duties. He does a reasonable job of it and we all know how capable he is but with him having to cover so much rhythm, keyboards cover a lot of what would have been his leads and I prefer to hear a guitar leading songs despite how talented Janne is on the keys. Fingers crossed a 5th member is added for the next release to free Alexi up a bit. All in all it is a bit of a mixed bag with a few very good songs, a few okay songs but also a few dull and repetitive songs. It isn’t a carbon copy of their past work and there are moments of daring and inspiration but they are not as prominent as you may like to hear. All in all it is a good, but not great, album.