I’m pretty scared of spiders…not arachnophobia or anything but enough that I have to get my wife to come deal with one if I see it. In gaming it’s a chance for me to get my own back from the safety of my armchair even if sometimes they still creep me out. Spiders are becoming an over-used enemy in most games now but it hasn’t always been the case, sometimes they have been used to wonderful effect…

As Gabriel looks around in confusion he somehow manages to not see or hear the huge eight-legged monstrosity lowering itself behind him. It’s an ugly looking thing with huge legs & 2 big fangs & I really liked the way it stalked Gabriel for a moment just waiting to pounce. It’s just a pity the resulting battle is far too easy so any threat is all but eliminated.

The build up to Silitha is great…you make your way through buildings covered in webs & protected by smaller spiders. Eventually you break your way through barriers of web to reach where she lurks. Silitha looks cooler then the battle actually is but I have to commend the usage of the Zelda-esqe hook-shot to do battle with her. She can move super-fast so you have to hook your way to her before slashing away with your weapons.

It’s a fun battle & forces you to think fast.

Ok by the end of Skyrim I was sick to death of dealing with spiders as they could be found in almost any cave & rarely caused any kind of challenge. Still they were nasty looking things & on more than 1 occasion they made me jump. I think the freakiest thing about the Skyrim spiders was what you found throughout their lairs…the webbing & remains.

7 – Ghostbusters: The Videogame – The Spider Witch!

Now this was inventive…the story in the game goes that an anonymous woman spent several years in the 1920’s living in the hotel that you spend a lot of time in-game. There she would lure men to her room before murdering them. Her reward by her master, Ivo Shandor was to be turned into the spider witch & guard the plane between our world & the ghost world.

When you do eventually battle her in her lair she is a nasty looking thing & the battle is a tense one. She constantly runs off before reappearing behind you ready to pounce.

The Kill Master (played by Lemmy) needs new bass strings, the best place to get them? The lair of the metal queen.

On your trip through the lair you will fight of a few small minions to give you an idea of what you might expect but nothing compares to when you finally reach her. She is a giant metal spider queen who can spit acid & can spin amazing bass guitar strings instead of silk.

To defeat her you have to expose her weak spot, a rusty engine core.

Urgh…the remake of Resident Evil on the GameCube managed to produce one of the ugliest & realistic (at least back then) looking sets of spiders ever. They made my skin crawl & were no easy battle either…avoidance was the key! 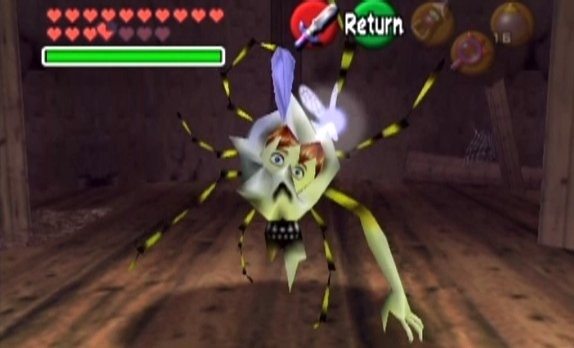 How many of you tried to kill him the first time he dropped down in front of you? I know I did, I mean look at him?! Even knowing that he was human but cursed didn’t make me feel any better so I would often take pleasure in hitting his soft side (the only way to kill a skulltulu) & listening to him scream.

Killing all 100 gold skulltulu’s became more about not having to look upon that hybrid instead of the prizes. Still, what’s the deal with his neighbours? No-one thought to check up on them?

Ok I might be cheating a bit here as technically these aren’t spiders but they have all the characteristics of one so I think it counts. Other than being pretty horrible to look at they crawl across ceilings on all fours to get at you & constantly try to dodge your attacks.

Often they will retreat & attack from a different direction, meaning you always have to be on your guard. By far the most unique one is the first that you meet & the only one to have a name & different outfit, Rose. The way in which she sings & drops rose petals over the player is extremely unsettling.

So who saw that coming? Leading up to that point there had been a suspicious absence of anything creepy crawly like. The caves gave no impression that any spiders existed instead your main worry being hunters & loose rocks ala Indiana Jones.

It’s after dodging one of these huge rocks which reveal a new door that you come across the most unsettling boss in any Resident Evil game to date. Open the door & go into a giant spiders nest – it instantly reacts to you & begins to attack by spitting acid or by hitting you with its front legs.

It doesn’t take much to kill it as long as you can keep your nerve but to make matters worse once you do kill it, it cracks open releasing loads of tiny spiders that also start to attack. Makes me shiver just thinking about…

1 – Limbo – What nightmares are made of…

The best use of a spider in video games I have ever seen, it’s just horrible. You rarely see anymore then its front legs but, trust me that is enough. It stalks you for the first 3rd of the game resulting in some seriously panic moments. None more so then when it does actually catch you & wraps the boy in web for a future meal. Having to hop our way to safety while being slowly perused by it is the highlight of the game.

When you eventually get to fight back it is with a huge sense of pleasure.